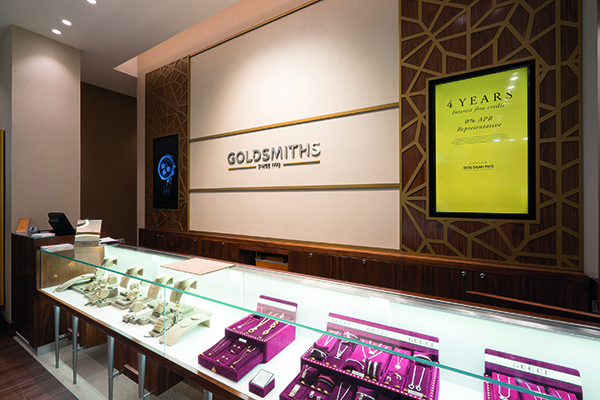 The first jeweller to open within Oxford’s brand new Westgate shopping development, Goldsmiths has made the most of the opportunity by unveiling a brand new store concept. Working alongside long time design consultants Quadrant Design, the new concept makes the most of a prime first floor location with a standout, double height shopfront.

Work to create this new store began earlier in 2017 before an 11 week construction programme commenced in the summer. Sonia Brown, Design Director of Retail at Quadrant Design, spoke to Premier Retail about the company’s relationship with Goldsmiths and some of standout elements of this new concept:

“We’ve been working with Goldsmiths for seven years now and we’re their sole consultancy for retail projects, both refurbishments and new builds. Prior to the Oxford site they had a concept that they’d rolled out across the estate but the brief for Oxford Westgate was to make a luxury concept that will hopefully be used going forward. With Oxford then they were much more open for us to suggest new design finishes, new features and a new language which would portray Goldsmiths a new, luxury light.

“The store is in a fantastic corner location within the shopping centre so what we’ve done in terms of the design is introduce a shimmer wall as the high level treatment behind the glazing. We had a tricky shopfront in that we had a double height space to fill with only a single sales floor trading space. As it’s a jeweller they don’t have many opportunities to visual merchandise at a high level with products so we had to think of something innovative which would tie in with the brand but also act as a beacon within the shopping centre.

“The shimmer wall is basically boards of metallic sequins which range from a really bright gold through to silver and white. The colours act as a gradient from one side to the other and help create a high impact at a high level. The shopfront was the biggest challenge but proved to be a great opportunity. 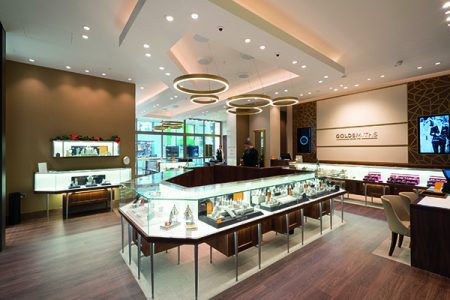 “We also designed a working clock to be incorporated into the shopfront. We wanted it to be reminiscent of Blackett Street which is one of the historic Goldsmith stores in Newcastle. There is a famous Rolex clock outside, known as the kissing clock, and we wanted to replicate that concept in Oxford and make the clock a meeting place within the Westgate development.”

While the shopfront was an opportunity to create drama and a new piece of history, internally the store boasts a number of new finishes. This includes a hardwood floor, a first for Goldsmiths, and a 44 sqm in shop Rolex store.

Moving forward the hope now is that the new concept will be rolled out to other locations around the country. Reflecting on Quadrant Design’s relationship with Goldsmiths, Sonia added:

“Everyone’s really proud of the design and it definitely stands out in the centre. Goldsmiths is one of our longest serving clients, we do a lot of work with them and are really passionate about the work we do. To be able to introduce a few new design elements and push the boundaries was a pivotal turning point for the relationship between Quadrant and Goldsmiths and we’re hoping we can continue to support them in terms of design to make their stores fantastic.”