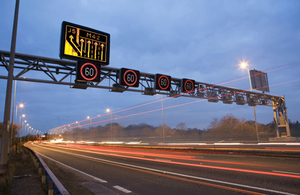 Multi-million pound road upgrades announced on 28 December 2017 will help create more than 4,300 jobs and over 1,700 homes for people across England.

The improvements, worth just over £67 million in total, will mean opportunities in Wigan, Greater Manchester, Marlow in Buckinghamshire, Newton in Nottinghamshire, Cumbria and Plymouth.

Highways England is making a £16.6 million contribution towards the schemes from its Growth and Housing Fund, alongside private sector developer contributions and other public funding making up the rest.

Jim O’Sullivan, Highways England Chief Executive, said: “Each of these improvements will ensure England’s strategic road network continues to make a valuable contribution to the prosperity of our country. We will continue to use our Growth and Housing Fund, working with a range of local stakeholders to unlock further development sites around the country.”

The designated £100 million fund was set up as part of the government’s £15 billion investment in roads and provides financial contributions towards the cost of road improvements needed for new developments that provide new jobs and much needed homes.

Transport Secretary Chris Grayling said: “Transport investment is crucial to a strong and resilient economy – that’s why we are making the biggest investment in roads in a generation, spending £23 billion across the country to improve journeys for motorists.

“These upgrades from Highways England will benefit the regions, giving a boost to businesses and better access to the jobs and homes that people want.”

The Designated Fund is part of Highways England’s award-winning “The Road to Growth” strategic economic growth plan. The plan received national recognition from the Institute of Economic Development (IED) for having the “greatest economic impact” at their 2017 annual awards ceremony.

The five schemes announced are:

The scheme will create the opportunity for up to 560 jobs at the Globe Business Park and enable over 22,000 sqm of vacant space that would be brought back to life and used by businesses. In total, the project will receive funding of £1.75 million which is being made up of £1.18 million from the Growth and Housing Fund, £500,000 private finding and an additional £63,000 provided by the Local Enterprise Partnership. Work on the scheme is expected to commence late 2018/spring 2019.

This package of work is designed to improve accessibility in the area, help to reduce congestion and create smoother journeys for drivers. The link road will create a new high profile gateway into Wigan town centre from the M58/M6 and connect a number of key employment sites to the strategic highways network, bringing the opportunity to create new jobs and contribute to economic growth. The scheme will be funded by a combination of public and private sector contributions, including £5 million from the Growth and Housing Fund and £10.9 million from Greater Manchester Growth Deal. The new link road is currently planned to open to traffic by the end of 2020.

Allocated £2.9 million from the Growth and Housing Fund, a new link bridge over the A46 will be installed connecting the former RAF Newton site with critical transport links and public amenity services in central Bingham. The scheme will also receive £970,000 of private funding and will unlock the land to create up to 550 local homes and deliver substantial benefits to improve safety and conditions for vulnerable road users.

This scheme will see an upgrade of the existing junction at Cross-a-Moor, Cumbria into a four arm roundabout which will provide a number of key local development sites with direct access to the A590 trunk road. The £5.05 million scheme has been allocated £3.05 million from the Growth and Housing Fund, £2.03 million in third party match funding which will include £1.73 million of private funding and a contribution from South Lakeland District Council. The scheme will also unlock 106 local homes, and three further sites with the potential to deliver 895 new homes In the future.

This £37.84 million package of works includes the construction of the Forder Valley Link Road which will connect the A386 at Derriford to the A38 to the east of the city. Allocated £4,470,000 from the Growth and Housing Fund, the link road will form part of a range of transport interventions that will help to accommodate a number of developments and will unlock up to 651 homes, and 1,227 additional jobs. The scheme will also be funded by a private match of £6.4 million.The scheme is fully supported by both the local authority and the LEP (local enterprise partnership, with a substantial £22.55 million of other public (LEP) funding also being brought forward to enable the scheme to progress.