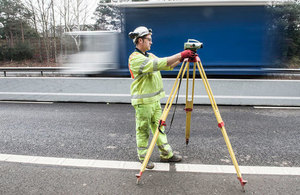 Plans for a £242 million investment on the Manchester to Sheffield Trans-Pennine route take a step forward next month with the launch of a statutory consultation.

The A57 improvement on the Greater Manchester side – featuring new dual and single carriageways between the M67 and Woolley Bridge – is the centrepiece of the Trans-Pennine Upgrade programme and requires special planning permission. There are also other important improvements along the route with safety and technology improvements either side of Woodhead Pass – and a major overhaul of Westwood roundabout in South Yorkshire where the A616 meets the A61.

Highways England unveiled the timetable for the statutory consultation on Monday 29 January. It will run between Monday 12 February 2018 and Sunday 25 March 2018 with a programme of public consultation events and a variety of other ways for people to get involved – including by email, post and online.

Highways England’s Trans-Pennine Upgrade project manager Monica Corso Griffiths said:”Having announced our preferred options for this important investment last November this is now the opportunity for everyone concerned to help us shape the detail of the individual schemes before we submit firm and final proposals to the planning authorities.

“We’d urge anyone with an interest in the improvements to let us know their views. This is an important investment in one of the most important east to west routes in the country. The improvements form part of the current £15 billion government investment in motorways and major A roads and are a vital element of Highways England’s support for the Northern Powerhouse – unlocking the potential for new homes and jobs by tackling congestion.”

The proposals included in the public consultation are:

Highways England will need to secure a development consent order (DCO) to enable it to build the new stretches of road at Mottram. To help Highways England prepare its DCO to the planning authorities, statutory consultation events are being staged across both sides of the Pennines during the consultation period. As well as the public exhibitions, paper response forms and consultation brochures will be available at locations open to the public from 12 February and can be handed in at these events or sent to the freepost address provided on the form.

Further information about the venues for the events, scheme proposals and details of the deposit locations, which include some local post offices and libraries, can be found on the scheme website.

Anyone who wants more information or to give their views on the scheme can also email the project team at: Trans_Pennine_Scheme@highwaysengland.co.uk or call 0300 123 5000, the Highways England’s customer care centre.