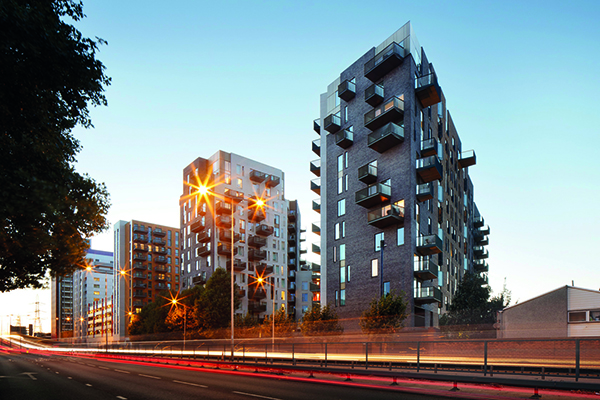 Providing 216 new homes in London’s Canning Town, the third phase of the Rathbone Market development was completed in April 2017. The project has received widespread attention in the time since, having won and been nominated for a number of awards.

Also known as ‘Lumire’, the project was backed by the English Cities Fund – a partnership between Muse Developments, Legal and General and the Homes and Communities Agency – with the aim of creating a lasting legacy for the local community and the environment. Phase three of the development comprises three linked blocks ranging from 6 to 14 stories that sit in a ‘C’ configuration and are accessed via a communal courtyard garden. 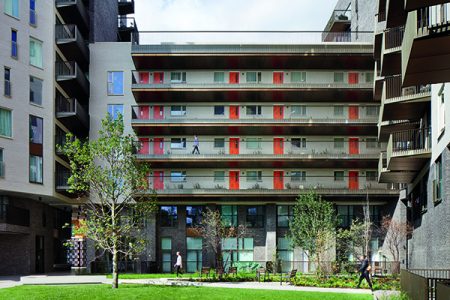 In October 2017, Rathbone Market phase three was successful at The Sunday Times British Homes Awards in the ‘Development of the Year (schemes of more than 200 homes)’ category. The project has also been recognised with nominations at the World Architecture Festival Awards 2017, Brick Awards 2017 and London Construction Awards 2017.

London-based architects Project Orange were responsible for the design of phase three but their relationship with the overall development stretches back a decade when they collaborated with CZWG on the Rathbone Market masterplan in 2007. Project lead Barry Stirland, Associate at Project Orange, spoke to Premier Construction about this final phase:

“This development was one of the first parts of regeneration in Canning Town as part of a huge investment that the London Borough of Newham are making. This site was finishing off the redevelopment of Rathbone Market, providing some high quality and affordable new homes in the borough.

“After the incredible success of phases one and two, the client came back to us in 2013 looking to push on with the project. Having achieved outline planning in 2008 which set certain parameters for the development, we returned to the drawing board with there being a new planning framework essentially having to start again but within that original parameter.

“Architecturally, the building is quite large so we used a number of ideas to try and break down the massing. There’s quite a wilful composition on the façade which uses the windows, patterned bronzed spandrel panels and balconies powdered coated in the same colour. This arrangement helps provide each apartment with its own characteristic. You can be walking down the street and think ‘that’s my home’.”

At the heart of the development is a communal garden that all residents have to pass through on the way to their apartments. Rainwater is captured at roof level and slowly drained into rills laced through the garden. There is also a community allotment on the lowest roof. Having overcome a number of challenges to reach completion, Rathbone Market phase three is an innovative piece of architecture that looks to the future. Reflecting on its immediate success, Barry concluded:

“It was particularly gratifying to be awarded the Development of the Year at the Sunday Times British Homes Awards. After spending such a long period working on this, going back to 2008 and the masterplan, it shows that when you invest in good design it can make a difference to people’s lives.” 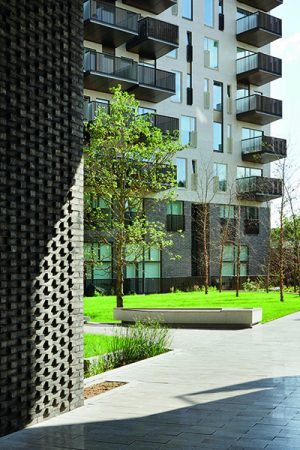