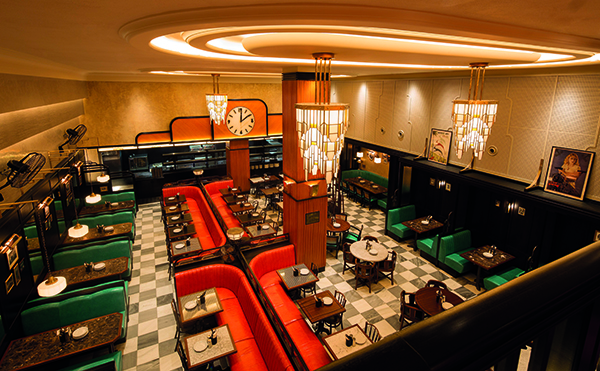 The sixth location for the popular Dishoom brand has launched in Kensington, inspired by the Bombay Art Deco and jazz scenes.

Housed within the distinctive Barkers Building, Dishoom Kensington includes a large 200 cover all-day dining hall, an open kitchen and a mezzanine gallery stage for live musical guests to entertain guests. A further 50 guests can be accommodated in the Permit Room bar which offers brand new drinks alongside old favourites.

Executive Chef Naved Nasir’s lovingly curated menu of Bombay comfort food will be available all day, and includes Dishoom classics such as House Black Daal, Pau Bhaji and the Bacon Naan Roll as well as newer favourites such as Jackfruit Biryani and Bun Maska Pudding.

The design and story of Dishoom Kensington is rooted in 1940s Bombay. Dishoom co-founders, Shamil and Kavi Thakrar, and long-time design partners Macauley Sinclair spent many days in Bombay studying the city’s Deco-rich areas and visiting archetypal exemplars of 1940s Bombay Art Deco. Amongst these were the United India Building, New India Assurance Building, Life Insurance Building, residential buildings such as Palm Court, and, of course, the city’s collection of beautiful Deco cinemas, such as Liberty, Eros and Regal.

The team sourced over 100 pieces of period furniture, artwork and light fittings in Bombay – each now lovingly restored to sit within Dishoom Kensington. Other features include a marble monogram inset at the entrance (a reference to the United India Building), the very large and beautiful clock in the dining room (a likeness of Bombay’s Life Insurance Building clock), the double-height dining hall, fluted maple panelling and illuminated coffered ceiling (inspired by Liberty Cinema), and two Art Deco stone frieze panels depicting dancing deer and frozen waterfalls (similar to the stone friezes of Eros Cinema).

Shamil and Kavi were greatly inspired by Bombay polymath, author and dear friend Naresh Fernandes. His book Taj Mahal Foxtrot is a musical history of Bombay’s little-remembered jazz age and is an archive of stories and photographs of jazz icons from the era (such as Leon Abbey, Teddy Weatherford, Chic Chocolate and Rudy Cotton). Many of these photographs (kindly gifted by the families of the artists) now sit alongside family portraits on the walls of Dishoom Kensington.

The Dishoom portfolio includes four other sites across London – Shoreditch, King’s Cross, Carnaby and Covent Garden – as well as a sole location outside the capital in Edinburgh.

Dishoom pays loving homage to the Irani cafés that were once part of the fabric of life in Bombay. Opened early last century by Zoroastrian immigrants from Iran, there were almost 400 of these cafés at their peak in the 1960s. Today, fewer than 30 remain. These cafés broke down barriers by bringing people together over food and drink.

Like the old Irani cafés, Dishoom breaks down barriers: in its restaurants, which employ and serve people from all walks of life, at its events, and through charity (donating a meal for every meal – 3 million meals so far).

Taylor’s Classics specialise in the design, manufacturing and restoration of furniture for the hospitality industry including pubs, restaurants, cafes and hotels. The firm’s collections include traditional and modern classics as well as reclaimed antique furniture. The company uses its expertise in antique restoration and manufacturing to supply new high quality furniture in a wide variety of styles to the hospitality sector.

“Dishoom Kensington has a fantastic interior so we were delighted to have been able to supply so many of the tables and chairs for the restaurant. We were pleased to manufacture a number of bespoke pieces that we think really capture the essence of the period.”

“We pride ourselves in providing furniture of the highest quality and making life straightforward for our customers. We hope to help produce stunning interiors that will work for many years to come.”