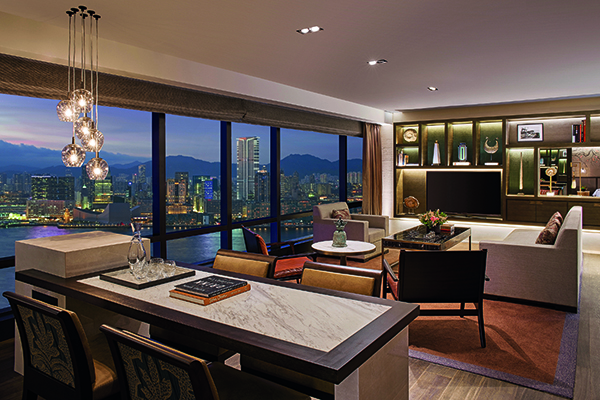 Boasting a prime waterfront location on Hong Kong Island, Grand Hyatt Hong Kong is a 5-star destination hotel. The hotel is home to 545 rooms and suites, nine world-class restaurants and bars and an extensive range of leisure facilities.

In 2016, the hotel’s rooms and suites underwent a significant renovation programme. The Grand Suites, designed by esteemed Melbourne design firm BAR Studio, were unveiled in September 2016 and were inspired by the idea of telling a story of fictional travellers. In October 2017, one of the Grand Suites received industry recognition when it was awarded an International Design Award. The Ambassador Harbour View Suite came out on top in the Hotel Bedroom and Suites Design category. 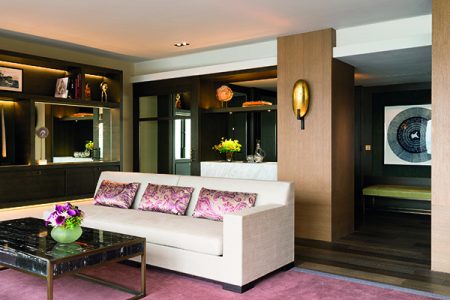 Created by Stewart Robertson, Principal/Director of BAR Studio, each suite within the hotel has a distinctive character and the Ambassador Harbour View Suite is no different. The award-winning suite was designed for a traveller characterised by ‘Bohemian Chic’.

Imagining a free-spirited sophisticate who has travelled through the east and passionately explored foreign places, attitudes and cultures the suite is based on a soft and meditative palette of pale timbers, leather and stones, golds and bronzes – accented with dark timber framing. The sophisticated and relaxed base-notes of the interior, with textural differences to create interest and intrigue, reflect the tonal palette of the hotel’s Presidential Suite. In this iteration the base palette is contrasted with exotic and ethnic touches of paisleys, prints, and Chinese-influenced designs in the fabrics and details.

A hand-painted, embroidered, customised Fromental silk wall covering frames the bed, organic patterned damask silk inserts are set into the backs of the dining chairs and a pattern of woven marble mosaic runs through the bathroom floor and walls. Soft colours are layered throughout the suite bringing a feel of elegance and flair. The lighting, art and accessories of the suite add another level of intrigue and personality to the space. Hervé van der Straeten’s dramatic bronze wall sconce adds a note of sophisticated primitivism. Accessories and art feature eclectic objects and a mix of contemporary and classic moments, suggesting a collection amassed over many years of travel.

Speaking as the Grand Suites were unveiled, Stewart Robertson said:

“The greatest challenge of the project was working with the expectations of such a great hotel and trying to take it into the next generation. I was aware of how much people love Grand Hyatt Hong Kong, and how much a part of their history and their memories it is. We were trying to retain what was great from the original hotel, keeping the hotel’s appeal to the people who already love it, but also appeal to the next generation.” 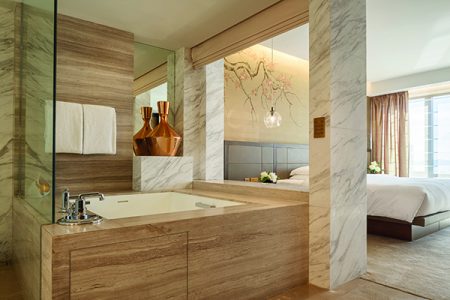