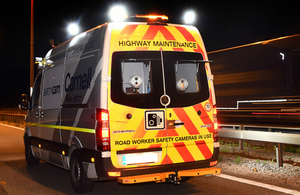 An innovative dual camera system which can spot both road workers speeding through construction sites and road users who illegally drive through cones has been hailed a potential life saver.

This winning system, the first of its kind, is housed in one vehicle, and is currently being extensively tested across motorways and main A roads managed by Highways England. It is one of the winners at the prestigious Highways England Health, Safety, and Wellbeing awards.

The awards, open to Highways England and its supply chain, attracted 115 entries across six categories. The nine winning entries announced ranged from initiatives to improve the mental health and wellbeing of staff to improving the safe loading of lorries.

In the first trials, in the West Midlands, a 50 per cent month-on-month reduction was recorded in road workers driving 10mph above the signed limit through sites. And in Essex the number of roadworks incursions reduced by more than 80%.

The camera system – developed by Carnell Support Services and Kier Highways – was one of two winners in the Health & Safety Innovation category at Highways England’s inaugural Health, Safety and Wellbeing awards ceremony.

Jim O’Sullivan, Chief Executive of Highways England said: “It’s well known that safety is our first imperative and I am delighted that these awards highlight that. The camera system, for example, will ultimately save lives. This project and the other winners show how innovative ways of thinking will make things safer for those working on and using our strategic road network and these awards also highlight the mental health and wellbeing of staff is as important as feeling safe in the workplace. I look forward to seeing more achievements in years to come.”

Highways England chairman Colin Matthews said: “I am delighted that colleagues in Highways England and partner organisations are finding ways to reduce injuries on our roads. Congratulations to Clancy Group whose success in making the roads safer for their drivers can be widely replicated by others.”

The nine winners were:

An initiative to improve the awareness and understanding around safely securing loads on lorries or for customers transporting large goods. Highways England’s Incident Prevention Team developed Police Load Security Training in partnership with the Health & Safety Laboratory (HSL) to help them better understand load security enforcement and how to help educate lorry drivers.

Over 12 months, this driving programme saw a 20% reduction in insurance claims, a 20% improvement in driver performance score and a 3.6% reduction in fuel use per vehicle due to safer and more fuel-efficient driving practices. All drivers are proactively engaged in the Fleet Safety Management and Compliance Programme which is run by a dedicated team and supported by the Clancy Group Board of Directors.

The Vehicle Checks campaign identified the second largest cause of serious accidents can be attributed to drivers not carrying out basic vehicle checks in advance of long or significant journeys. Customer insight demonstrated a 15% increase in consumer awareness to performing vehicle checks.

3. Project of the Year (supply chain only) – one winner

A targeted approach by the joint venture to improve health safety and well-being has resulted in a workplace where everyone can take responsibility for their own and their colleagues’ health, safety and wellbeing. The team’s efforts are also reflected in the schemes excellent all round safety statistics with a zero Accident Frequency Rate (AFR) when the project finished.

4: Graduate/Apprentice of the Year – two winners

Amelia Kirwan joined Highways England in November 2016 as a Project Manager Apprentice. Amelia was recognised for her approach to work and her passion to learn and expand her knowledge. She is seen as a real asset for the team and recently was successful with her application for a temporary role in the team.

Jessica, who is a graduate engineer in AECOM’s Strategic Highways team in Chesterfield, has undertaken various initiatives to tackle mental health stigmas and support at a local and national level for AECOM. These include working with colleagues to include wellbeing into weekly safety stand downs, liaising with local authorities and charities to provide line manager training and Lunch & Learn sessions in the local office, and campaigning for mental health first aiders to be provided in every office.

CONNECT, a programme to drive employee wellbeing, has significantly reduced staff turnover and increased employee engagement against all performance measures. This was achieved through initiatives such as in areas including personal diagnostics, personal coaching and mindfulness training. During 2018-19 Graham will invest over £1m during 2018/19 to roll the programme out to all employees.

Following the death of a subcontractor in July 2015, Mway Comms put in place an action plan to improve the culture and support within the company. For two years Mway Comms implemented a progressive health and safety (H&S) Improvement programme that involved a new H&S system, an in-house H&S advisor and a commitment from managers, supervisors and operatives to comply with policies and procedures. In 2017 Mway Comms had zero RIDDOR’s, (Reporting of Injuries, Diseases and Dangerous Occurrences Regulations) making its Accident Frequency Rate (AFR) zero.