The institute of Competitive Socialising has opened a new Swingers site following the success of their first permeant site in the City. Opened on 16 March 2018, the site at Oxford Circus is set in a 20,000 square foot unit in the former BHS Flagship store, which closed in August 2016.

Swingers in the West End has taken all of the things that guests love about the Swingers in the City – the holy trinity that is street food, cocktails and crazy golf – and given them a brand new immersive setting. WFC was the main contractor.

Whereas Swingers City reimagined a 1920s English country golf club set in rolling, lush grounds, Swingers West End takes crazy golf back to its seaside roots in a venue that reimages the faded glamor of the 1920s English Riviera. 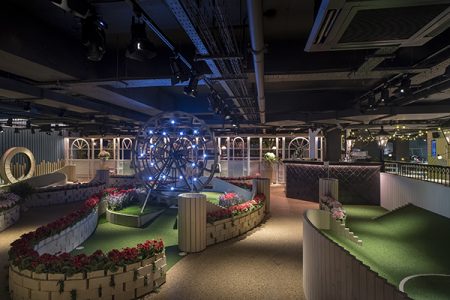 Features of Swingers West End include:

Drinking is encouraged at Swingers, as is a good meal from one of the street food vendors on site. Street Food vendors at Swingers include: 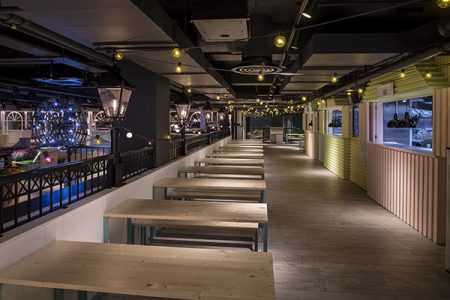 Swingers co-founder and MD Matt Grech-Smith said: “When we first combined crazy golf with cocktails and street food at our pop-up back in 2014, because it had never been done before, we had no idea how enthusiastically our concept would be received. Fast forward three years and Swingers City has been off the chart and has truly put the crazy in crazy-golf – we can’t wait to do it all over again, breathing new life into an iconic location in the West End.”

Swingers West End is open seven days a week for guests over the age of 18.