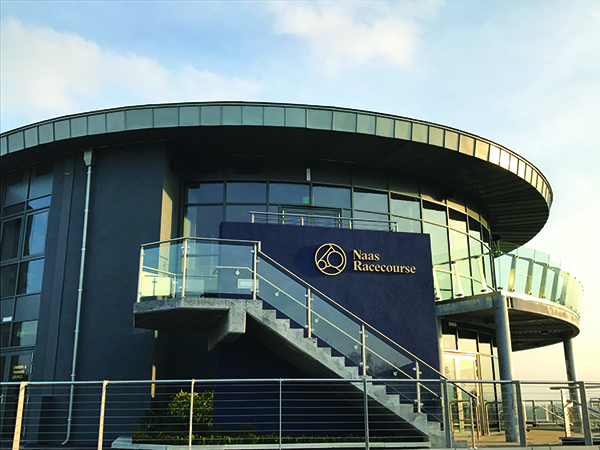 The new feature building is an unusual structure; cylindrical in shape, it boasts wrap around glass and several balconies which snake around the building offering incredible views to the track and adjacent Parade Ring. Located just between the Grand Stand and Parade Ring the Feature Building will house a public sports bar on the ground floor, while a stunning Owners and Trainers Lounge is located on the first floor. The Owners and Trainers Lounge enjoys 180° views of the track making it one of the world’s premier vantage points to view steeds in motion.

Built by Duggan Lynch Builders and designed by Hamilton Young Architects and Turnburry Design Consultants in London, the new Feature Building, known as The Circle, is believed to be the only racecourse building of its kind in Britain and Ireland. The innovative cylindrical design allows for greater vantage points for the general racing public and owners and trainers alike. Nass Racecourse itself is a boutique style track-everything is easily accessible and spectators can get up close to the action which results in an engaging and exciting racing experience. 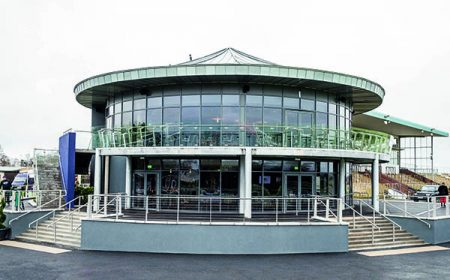 Speaking to Premier Hospitality magazine about the project, Andrew Judge from Hamilton Young Architects said: “We were given a very specific brief for the project because the client had had specific conversations with a racecourse expert beforehand and one of his recommendations was a circular feature building.

“There were a number of things involved with the project including a new pavilion building – which is about 800 sq. m. – a new admin office, childcare centre and new self-service restaurant so there was quite a bit involved and The Circle building was just one part of the project.

“We have had very good feedback from race goers and we have had some nice compliments. It has been praised for the views its gives of the race track and the lift that it gives to the whole racecourse.”

The HRI Capital Development Scheme which Nass Racecourse has undertaken is in order to future proof the facility for years to come.

“Sport and racing is a competitive business both on and off the track,” said Nass Racecourse Manager, Tom Ryan. “In order to attract race goers you need to be able to offer them a great experience with second to none facilities. We want to make sure that we keep on top of our game – we don’t want to just meet the expectations of our customers but to exceed them. We have invested heavily in the racecourse, not just in our buildings but in technology too. The new building is fitted with the latest audio visual equipment and super-fast Wi-Fi, which we hope to have in place this coming year, in order to ensure that we remain current, and can compete with the best tracks in Britain and Ireland.”

Nass Racecourse has a history of reinvestment and its board and shareholders have continually invested in the property. The existing grandstand was built in 1997 at a cost of €2.2 million, while in 2003 a public bar and weigh room was constructed. In 2009 over €1.7 million was spent in order to create the existing stable yard. All of these improvements and additions culminated in elevating the status of Nass Racecourse and have allowed it to compete at an international level and also to host premier races. The next part of the redevelopment programme will see the interiors and public area within the grandstand upgraded including the Panoramic Restaurant.

“We are delighted to have had financial support for this project from HRI and through its Capital Development Scheme we have been in a position to carry out the necessary works. Our board too has been very supportive. This new building is testament to both HRI and our boards support and I would like to thank both parties for their continued good council and encouragement. We are very proud of the feature Building and can see it being used for many events, not just for race meetings. It has certainly secured our place on the international racing stage,” said Tom.

Andrew added: “Before this, there was the main grandstand but a lot of its facilities don’t have views of the track so this project gave us an opportunity to take advantage of the stunning views across the racecourse. It is the first building that you see when you arrive so it makes the racecourse look modern and much more contemporary

“It was a very important project for us and it is a very high profile project which has led to nice complements. It has also opened up other opportunities and it will be our flagship project for the next year or two.” 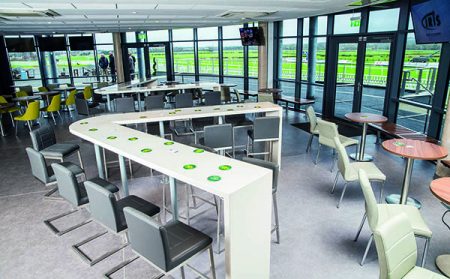 Walsh & Sheehan Ltd. specialise in plumbing, medical gases, gas, heating, control, ventilation, air conditioning and chilled services. The company was founded in 2001 by Owen Sheehan and Brian Walsh and serves all aspects of the market, from large mechanical projects to all forms of domestic development.

Past projects have included, the development of St John’s College in Johns Hill, Waterford for Mythen Construction; UCD Lochlann Quinn Business Schools for Duggan Brothers; and St Aidan’s National School Enniscorthy for Ganson Construction. In addition, Walsh & Sheehan Ltd. has been involved with the Stack B project at Trinity College, Dublin and University Limerick & Plassy Student Village, both for Monami Construction.

Most recently, Walsh & Sheehan Ltd. have been involved in the Naas Racecourse project. Working on this scheme, the company supplied and installed the mechanical application including heating, ventilation, air conditioning and domestic services.

“Naas Racecourse is a historical landmark location that’s recognised throughout the country, so to have the opportunity to undertake such a large upgrade of works was great. The standard feature of this project was the newly constructed pavilion building and it was an excellent opportunity for Walsh & Sheehan Ltd. to have an involvement with Duggan-Lynch Constructions in what will certainly be a landmark building for years to come.”

“At Walsh & Sheehan Ltd., our main focus has always been excellence in service. Operating on a national basis, we pride ourselves on the positive ongoing continuous relationships we have created with all our customers, project managers, consultants, architects and quantity surveyors.

“Throughout the history of the company Walsh & Sheehan has modernised, grown and adapted to meet the changing needs of the Irish market. The core business of the company is focused on serving all aspects of the market from large mechanical projects to all forms of domestic developments.

“With an ever growing average team of 35 – 45 employees, we can service any aspect of the mechanical/domestic services plumbing market.” 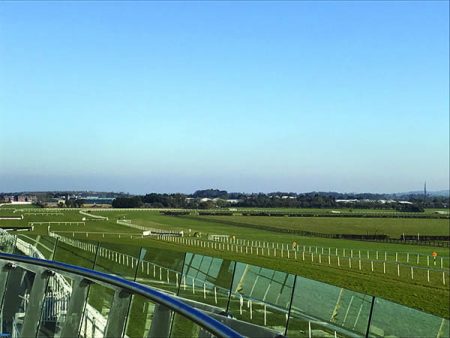 Originally based in Athy, County Kildaire, World of Catering moved to their current site in Kilcullen in 2014. In total the showrooms, warehouse and workshops cover circa 27,000 sq ft and they can direct source quality catering equipment at competitive prices.

For the new facility at Naas Racecourse, World of Catering was responsible for the kitchen design, supplying of the furniture and the project management. As well as working on NAAS Racecourse, World of Catering have worked with a range of clients from small cafés and family run businesses to hotels, production kitchens and food fans. This includes Galway Crystal, Delta Sports Dome, Rumbles Catering, Dublin Airport, Aherlow House Hotel and Amber Springs Hotel.

A spokesperson for World of Catering said:

“It was our pleasure to be selected to work with such a high-ranking organisation, like the HRI, at the stunning new build at the Pavilion in Naas Racecourse.

“As a company we pride ourselves in quality, teamwork and competitive pricing.”