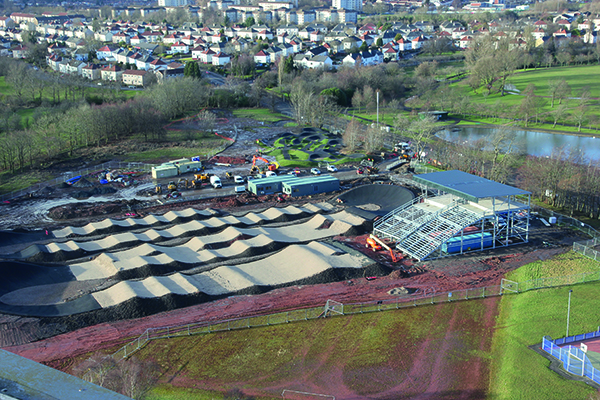 A £3.7 million Olympic standard BMX track has been built in Glasgow ahead of the 2018 European Championships – an exciting new multi-sport event bringing together some of the continents leading sports.

Located at Knightswood Recreation Ground, the new BMX Centre is the only permanent venue being constructed for use at Glasgow 2018 and will be Scotland’s only World and Olympic standard BMX Track.

Speaking to Premier Construction about the project, Glasgow Life Special Projects Officer, Isobel Shire said: “It was the desire of Glasgow to have something in the city as we don’t currently have an Olympic standard BMX track. There is one outside of Glasgow but that would have needed to be upgraded to hold the Championship and we wanted to be able to deliver everything in the same city.

“We have been building on an existing football pitch that hasn’t been used for several years. We have the main racing track and that is an Olympic standard BMX track with five and eight metre start ramps. The site also has a pump track which is a skills area and place where beginners can learn how to ride the jumps and work on their BMX skills. Everyone can benefit from the track because we have the area for people just starting out and then they can move on to the elite track – meaning they’re able to learn everything in the same place.”

Completion of the track will mean that Glasgow is the only city in the world with venues capable of hosting all four cycling discipline events within its boundary. The others are the Sir Chris Hoy Velodrome at the Emirates Arena, Cathkin Braes Mountain Bike Trails and the city’s streets.

Isobel added: “The scope of the project was to make a track that is suitable for elite racing but also somewhere that can be ridden by beginners. You will see from the track layout that there are two routes: so an elite route and a less technical route. From what the track designers have said, it should be quite a fast track to ride because it is not quite as technically difficult since it has been designed to accommodate a variety of riders, and this will be great for racing for the elite riders. We will keep it all in place after the Championships and it will be run by Glasgow Life as a venue. We have an anchor tenant called The Western Titans who will use it as one of their club tracks so we will have riders there every day.”

The 2018 European Championships will take place between 2nd and 12th August. The games, which will be held every four years, will be a highlight of the global sporting calendar, elevating the status of European Champions during an 11 day celebration of world-class sport and a packed 10 day broadcast schedule.

During this year’s games, Glasgow and Scotland will host Aquatics, Cycling, Golf, Gymnastics, Rowing and Triathlon.

Commenting on what it has been like to work on the project, Isobel said: “It has been really interesting. I haven’t been with Glasgow Life too long so it is exciting to work on something that is part of the big European Championships and that is quite prestigious. It’s been pretty amazing and I have never really done anything like this before.”