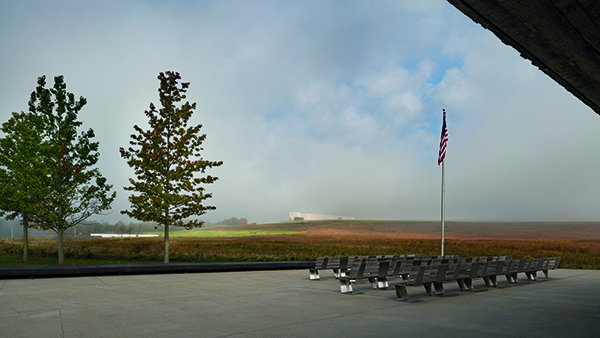 On September 24, 2002, the United States Congress passed the Flight 93 Memorial Act. The Act created a new national park unit to commemorate the 40 passengers and crew of Flight 93 who, on September 11, 2001, courageously gave their lives thereby thwarting a planned attack on the US capital.

The memorial, located outside Shanksville, Pennsylvania, where Flight 93 crashed, commemorates those who lost their lives and is a stark reminder of the sacrifice they made. 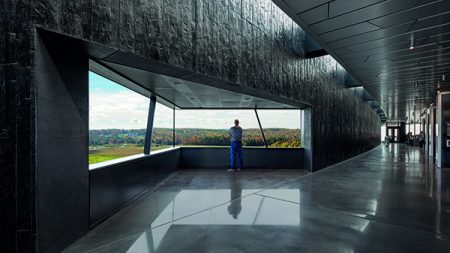 In 2011 the park’s Memorial Plaza, Wall of Names, 40 Memorial Groves and the Field of Honour all opened. This was followed in 2015 by the opening of the Flight 93 National Memorial Visitor Centre which uses photographs, artefacts, tactile models and audio and video pieces to convey the Flight 93 story. Also opening for the first time in 2015 were the learning centre, a multi-purpose gathering space for education programming and special events; a 2.4 mile system of pedestrian trails connecting the visitor centre with the Memorial Plaza; and the dramatic flight path walkway and overlook.

A two-stage competition to design the memorial site was won in 2005 by the team of Paul Murdoch Architects and Nelson Byrd Woltz Landscape Architects. This design has won a number of plaudits and was most recently recognised with a WAN Award nomination in the ‘Concrete in Architecture’ category. Paul commented:

“Concrete was selected as a primary material due to the desire for longevity as a public monument, its cost-effective durability in the site’s severe weather conditions, its versatility for different treatments and its plasticity to express a motif based on the grove of hemlock trees that absorbed the impact of the crash.

“The biggest design challenge was to create a memorial that would be both expressive and timeless, to allow visitors to feel the personal sacrifice of the 40 heroes on board the plane and the historic significance of their actions while keeping the memorial relevant and meaningful for future generations.

“We are grateful that the meaning and significance of our memorial design has been recognized internationally and honoured that it is included among so many beautiful and innovative projects.”

A spokesperson for the National Parks Service added:

“It’s fantastic to have this project nominated. Awards can enhance not only The Flight 93 National Memorial’s reputation, it helps our employees take pride in the work we do and inspire confidence in taxpayers about the quality and professionalism of our teams and projects.”

The final phase of the memorial is set for completion later in the year and will comprise a 93-feet tall musical structure housing 40 chimes. Known as the Tower of Voices, the unique chime structure is unlike anything else in the world and will provide a living memorial in sound. To follow the progress of the Tower of Voices or to learn more about the memorial as a whole, please visit nps.gov/flni. 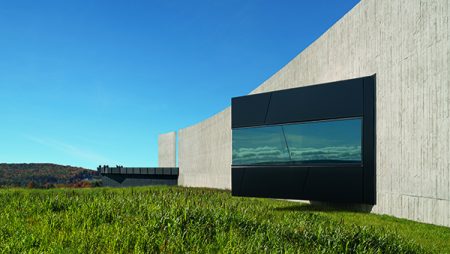 Gregg Payne specialises in the creation and delivery of outdoor musical art projects. Gregg tunes chimes and rods to specific frequencies and combines them into scales that resonate with the surrounding site or audience – to either be played passively (by the elements) or interactively (by visitors).

Twenty years ago, Gregg developed math to tune lengths of metal, which soon led to his focus on giant chimes and tubular metallophones, including his interactive Skylophone design which works with internal strikers, allowing large chimes to be played by hand without mallets. Many of Gregg’s works have been integrated into municipal parks, playgrounds, museums and public art projects, including “Resonance” in Chico CA, the City of Tucson and the Perot Nature and Science Museum.

Most recently, Gregg has been involved with the Flight 93 National Memorial project. Speaking to Premier Construction about the project, Gregg Payne, said:

“It has been an honour to help design the Tower of Voices chimes for the Flight 93 National Memorial. Chimes and bells have traditionally instilled a sense of wonder and reverence with architecture and this project provides an uplifting memorial experience and a healing place for all.

“It has been especially rewarding to work with architect, Paul Murdoch, the National Park Service and the acoustic and structural engineers at ARUP.”

“I love to create unique new instruments with a striking visual presence and excellent sound quality. Big chimes create a surprising level of acoustic sound which is felt as well as heard.”