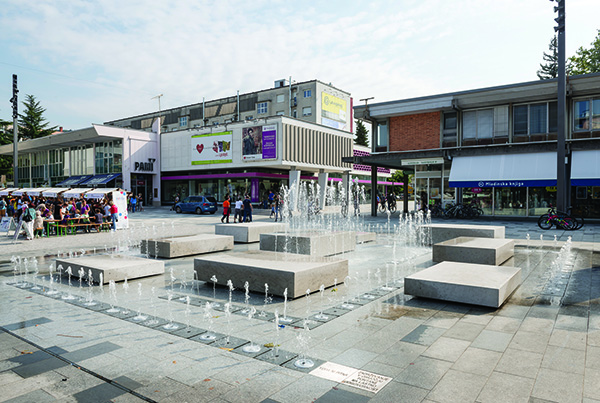 A project to renovate public spaces in the City Municipality of Nova Gorica, Slovenia, has received international recognition with a WAN Award nomination in the ‘Landscape’ category. The project, which began in July 2012 and was completed in September 2014, involved the renovation of the main square in the city centre.

The newly revamped square includes a playground for children, fountain, leading paving elements for blind people and specific crossings for the disabled. The project was a major development for the city as it marked the first step towards the sustainable transformation of the central part of the city. The transformation will hopefully also include new infrastructure, a reduction of cars and parking lots, more public space for social interaction, stimulation for public programmes and easier maintenance. The project was a joint venture between Studio Stratum, arco d.o.o and materia d.o.o.

The origins of the project can be traced back to when the City Municipality of Nova Gorica held two competitions to find solutions for the renovation of public open spaces in the city’s centre. The first phase of work based on these competitions saw three town squares developed – Squares Bevkov trg (Bevk’s Square), Rusjanov trg (Rusjan’s Square), and Trg Vrtnica (The ‘Rose’ Square). The three squares are located along the city’s main artery.

Bevkov trg is designed as a spatial expansion of the main urban transversal strip, which connects the eastern and western parts of the town via the main artery. The uniform pavement, urban furniture, and trees preserve and upgrade the function of the square as the town’s busiest point and living room. The physical asymmetry of the square is used to an advantage, making it picturesque and allowing for the construction of elements like a playground, wooden landings, summer gardens and a fountain.

With the addition of a newly developed parterre, Rusjanov trg connects to the surrounding buildings and increases the possibility of public movement in all directions. This development partially preserves the pavement along the modernist monument to Edvard Rusjan, pioneer aviator, while adding a multi-purpose wooden platform next to a cork oak.

Finally, Trg Vrtnica is a multi-use public area in the immediate vicinity of the municipal building. The design of the square provides an area for relaxing under the shade of trees and for organisation of major events. Urban furniture elements were harmonised with the design of the paving in terms of material and colour.

A spokesperson for Studio Stratum said:

“We are honoured to be nominated and we are happy that the complex features  different elements, which are essential for a comprehensive renovation, have been recognised as a quality beyond flashy images. Our approach in the modernist city of Nova Gorica could be described as ‘architecture as infrastructure’, architecture which enables multiple activities for different users and events, architecture which tries to be respecting the context, reading and upgrading it to a new level in order to become also the source of identity not  striving towards iconic or formal catchy elements.”

The renovation of the public area had immediate positive effects, encouraging social interactions and the restoration of deteriorated surrounding buildings and infrastructure. 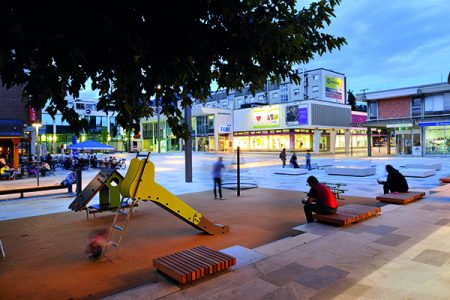