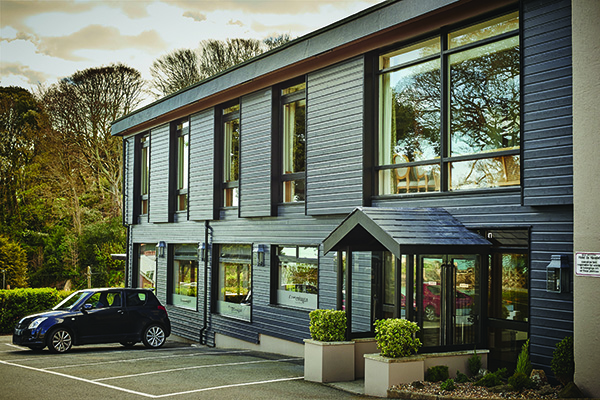 Continually evolving the highest standards of excellence, Sarnia Hotels have invested once again in the further upgrade of facilities at their three beautiful town house hotels in St Peter Port, Guernsey.

Sarnia Hotels is a long established family owned group founded back in 1956 when Jack and Ella Parker, and their daughter and son-in-law Sheila and Andre Sendlhofer first managed Moores Hotel.

The Hotel de Havelet was acquired in 1971 and more recently Les Rocquettes Hotel was added to the collection in 1996. The group continues to be personally operated by the family to this day.

At the Hotel De Havelet, the upgrade involved the conversion of an existing bar and restaurant into a more contemporary bar and grill, including changing the location of the kitchen and bar, and ensuring an improved ‘flow’ through the two rooms.

The design brief required the development of a contemporary and informal bar and restaurant, whilst emphasising the historical links to the main hotel building. The design aimed to attract a slightly younger demographic whilst still appealing to the existing customer base – particularly the hotel guests.

Interior designers were Rondel & Rondel and the main contractor was Darryl Rix.

Preparatory works included the provision of new drainage for both kitchen and bar areas, structural work to open up the two rooms, and digging out the floor of the old bar, as well as installing new windows.

Guests now enter into an attractive bar with stunning views and mixed level seating. This leads through to the restaurant area with an open kitchen – again with a mixture of fixed, high and low level seating. There is a ramp for disabled access into the restaurant and an open air terrace area where guests can eat and drink. The toilets were also refurbished and a disabled w.c was incorporated.

The interior decor has a slightly ‘Scandi’ style and the previously little used terrace has been transformed with exterior lighting, a firepit, a mobile bar, and planting, as well as partial covering. This has increased the number of covers significantly.

Challenges of the project included keeping the hotel up and running with building work ongoing – particularly with major electrical changes. The project ran on time with the new facilities completed ready for the main season.

Karel Harris, managing director of Sarnia Hotels said: “The project completely achieved our aim to put the Copenhagen bar and grill on the culinary map and attract a new generation of clients. Our corporate hotel residents enjoy eating in an informal atmosphere and our outside business has significantly increased.

“The main contractors did a very good job and the project has increased the turnover both on food and drink, and also enhanced the hotel making it appeal to a wider number of guests. The project is part of the ongoing improvement and development of our hotels and has set up Copenhagen as a destination restaurant.”

This scheme involved the creation of a larger, modern, energy efficient kitchen with delivery and cold room/freezer storage, a staff canteen and staff changing facilities.

The main contractor was Rihoy & Son and the architect was Roy Stewart.

Initial works involved the partial demolition of the old kitchen, the installation of a steel structure to support the main building, and the extension of the new footprint into the carpark.

The design brief was to create a commercial kitchen featuring the latest technology and to provide a pleasant working environment for the kitchen team, as well as to maintain the highest standards of both food hygiene and preparation.

In addition to a kitchen with a small pastry section, the new facilities include a delivery area for goods to be checked and put into appropriate storage. There is also a separate entrance for staff, with changing rooms, lockers and a small canteen.

The overall design is geared to provide both for ease of working and cleaning. Flooring has a resin finish which has fewer seals (as these tend to deteriorate quickly). The walls all feature high grade coloured kitchen panels – although these are generally in white, colour was used to make the overall effect less clinical.

External works included the levelling the delivery area and the planting of herbs and dwarf fruit trees in the small outdoor area.

Karel Harris, managing director of Sarnia Hotels said: “We now have a larger high specification energy efficient kitchen which conforms to all environmental health requirements and is easier to keep spotless. The staff have a small dining area and proper changing rooms and lockers. This has improved the working environment for our team and has enabled us to raise our standards.

“The project posed a huge challenge of continuing to run a busy hotel without a main kitchen. The works took longer than originally envisioned, which meant that we ran into the early part of the tourist season.

“The staff worked in very difficult conditions to continue producing excellent food, making use of portable refrigeration units. The partial demolition of the old kitchen meant that we had to prop up some of the building which required a great deal of flexibility with the contractors, structural engineers and other members of the project team to enable us to make the most efficient use of the space.

“The main contractor did a good job in difficult circumstances, which included keeping hotel customers happy, at the same time as running this huge project.

“Although a huge investment, the works were mostly to back of house. Hopefully customers now enjoy an even higher level of cuisine with seamless service, cooked by chefs who have a great environment in which to work.”

The £1m investment in JB Parker’s Bar & Cellar, formerly The Library Bar, at Moores Hotel included opening up and refurbishing the traditional brick cellar underneath the hotel, with its iconic curved brick ceiling, to create a wine bar.

Main contractor for the scheme was Rihoy & Son.

The main bar has an open kitchen with a charcoal flame grill, a chef’s counter and a stylish bar top imported from France. The mosaic flooring is built from individual tiles and the wooden floor has been aged by local craftsmen, while intelligent sound and lighting changes the mood to suit different times of day.

The bar also features a card-operated self-service wine dispenser and an area for private tastings.

The bar has had a number of names over the years including The Almanac and The Pollet Bar. It has been named JB Parker’s Bar and Cellar, as a tribute to the late Jack Buller Parker who first leased Moores from Bucktrouts in 1956 – the first step in the founding of the group which is now run by his granddaughter Karel Harris.

She said: “I do have confidence in the hospitality sector, although it’s a very challenging period, but you can’t just stand still. You have to keep re-inventing yourself and you have to appeal to the local market as well as the visitor market.

“It was the Library Bar for 27 years, with a couple of facelifts along the way, and it was time to see something new.

“We were delighted that Heritage and the planning department were very quick to agree to us opening up the cellar and putting in the new windows and we’re grateful to our neighbours who have been very understanding during major work right in the centre of town.”

Moores Hotel was originally the town house of the de Saumarez family of the Castel. It was not commandeered by the occupying forces during the war and the proprietor, Mrs Moore, offered accommodation to fellow islanders who had not been so fortunate.