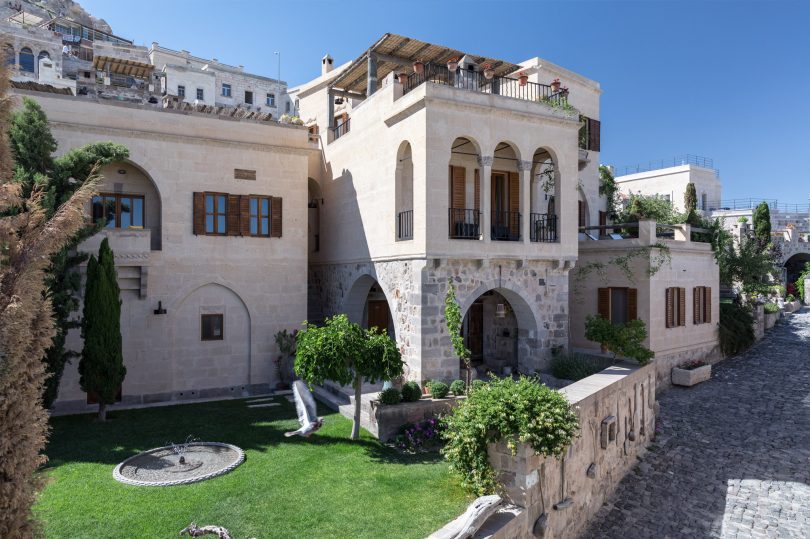 argos in Cappadocia , one of the seven wonders of the Mytha Hotel Anthology, which embraces the philosophy ‘Mediterranean Taste of Time’ encapsulating the blossoming affinity between the flow of moments, of seasons and of ages, and reflects the history, culture and Mediterranean lifestyle, has once again been announced as the ‘Best Heritage Hotel’ of Turkey.

Hotly anticipated around the world, the World Travel Awards, ‘the tourism Oscars of the world’, were delivered in the Greek capital, Athens this year. The 2018 stars of tourism industry were honoured on June 30th with a grand ceremony in Zappeion Megaron Hall. Already recognised by many international awards so far, argos in Cappadocia Hotel was selected as ‘The Best Heritage Hotel of Turkey’ for the second consequent year of the awards.

Located in the ancient Uçhisar village at the heart of Cappadocia, as a revival project of a thousands of years old monastery campus, connected caves, underground tunnels and historical houses; argos in Cappadocia is referred by its guests as a ‘village with a reception desk’. Beyond being an ordinary tourism operation, argos in Cappadocia offers a complete experience to its visitors both for accommodation and events with its extraordinary features such as a monastery, underground tunnels and cave cellars. Within the premises, Bezirhane is a 1500 year old monastery campus where monks have dwelled and the Silk Road caravans had lodged in before it was used as a linseed oil factory in the more recent past. This historical structure today hosts extraordinary events, meetings and parties with its superb acoustics and two giant domes. Another historical structure unearthed during the ongoing restorations in the antique village is the Museum Lounge which exhibits another historical bezirhane (linseed oil factory) with its hundreds of years old mill stones and mull channels, perfectly preserved under the soil.

The World Travel Awards are determined by the votes of travel professionals and high end consumers on a regional base and depict the best of the best globally since 1994. argos in Cappadocia was honoured with the same award in 2017.