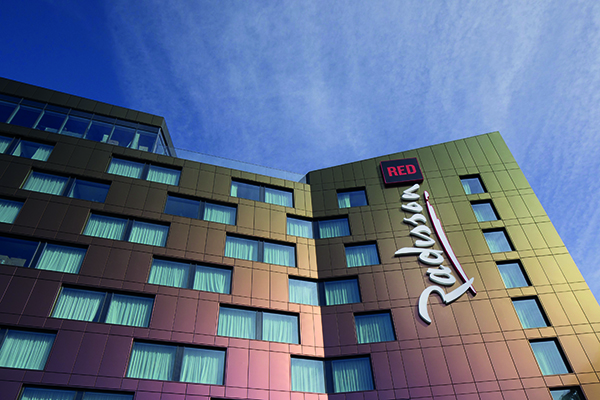 The UK’s first Radisson RED – and also the first new-build of the brand in Europe – opened its doors recently in Glasgow.

The hotel was constructed by Balfour Beatty, with the interior fit out being carried out by Thomas Johnstone – both commended for their work on the scheme. The interior of the new hotel was designed by Graven.

Located in the heart of the city’s music and art scene, RED Glasgow provides travellers with an ideal base from which to explore the city and is only minutes away from some of the best music venues in Scotland, including the world-renowned SSE Hydro.

For anyone looking to watch the sunset over the River Clyde, the hotel’s stunning new RED Sky Bar, Glasgow’s first rooftop bar, is the place to be. Here, guests can enjoy a bird’s eye view of the action with a RED cocktail in hand, tapas to share, and music from some of the city’s best up and coming DJ’s.

The Event and Games studios, where high-spec technology meets playful design, provide everything needed to throw an epic party or simply get meetings off autopilot. Each of the three events studios – 66 sqm, 40sqm and 55sqm – is equipped with modern technology and super-fast Wi-Fi.

Colin Chau, interior designer at Graven said: ““We have been working with Radisson Hotel Group for the last five years and developed the Radisson Red brand design from scratch, including schemes for hotels in Capetown, Brussels and Minneapolis.”

The overall brand design has been followed in each hotel – combined with locally inspired elements. In Glasgow the design incorporated the artwork of local artists to enhance this concept. In addition, each hotel has its own particular shade of red.

The spaces for the lobby, reception and bars have been designed as seamless, social multi-functional spaces which all work together.

Colin Chau commented: “While many hotels clearly delineate between lobby, reception and bar spaces, Radisson RED doesn’t obey any of these fussy conventions, instead reacting against. By cutting out many of the stereotypical corporate hotel moves we have tried to make Red a more intuitive experience for guests and a place that genuinely encourages people to occupy all spaces to suit their own personal needs whether that be on business or leisure or both.

“After designing these hotels in international locations, it was fantastic to work on one in our home town of Glasgow, with the River Clyde and industrial elements to draw as inspiration for the interior. Initial feedback on the new hotel, which opened in May, has been very well received and is a worthy exciting addition to the Glasgow hotel scene.”

Responsible for all operations at the hotel, Curator Michael Weston commented:

“We were excited to open and introduce RED to Glasgow and the wider UK. The RED experience is different – we encourage laughter, playfulness and even a little mischief with guests, and we use our spaces as a showcase for some of the best local talent in art, design, music and fashion.  We want people to come to the hotel, love what they see, and come back again and again.” 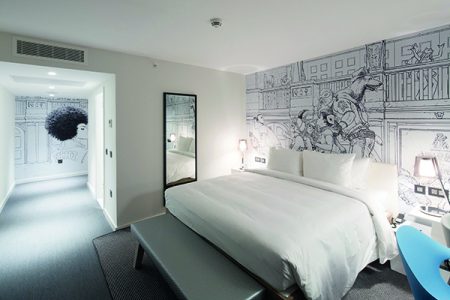 Founded in 1949, Bolon is a family-owned Swedish design company led by sisters Annica and Marie Eklund, third-generation members of the Eklund family.

In the past 10 years Bolon has revolutionised perceptions of woven vinyl flooring. Bolon has evolved from a traditional weaving mill to an internationally renowned design brand that collaborates with leading architects, interior designers and fashion designers.

Bolon’s clients include companies such as Armani, Google, Microsoft, Missoni and Four Seasons Hotels, as well as leading architects and designers such as Jean Nouvel and Giulio Cappellini. Bolon flooring has been used in the guest rooms of the Radisson Red Glasgow having been chosen by Colin Chau from Graven Architects. This was the company’s second hotel project with Radisson Red.

Marie Eklund, Bolon’s CEO said: “Bolon is very proud to be involved in this project. We see great advantages with Bolon flooring in hotel rooms and are investing in developing our business further in this area. We are proud on our environmentally sustainable development and manufacturing processes. All manufacturing takes place in a newly expanded production facility in Ulricehamn, Sweden, and all of Bolon’s products are certified to the highest standard by leading international certification bodies.”