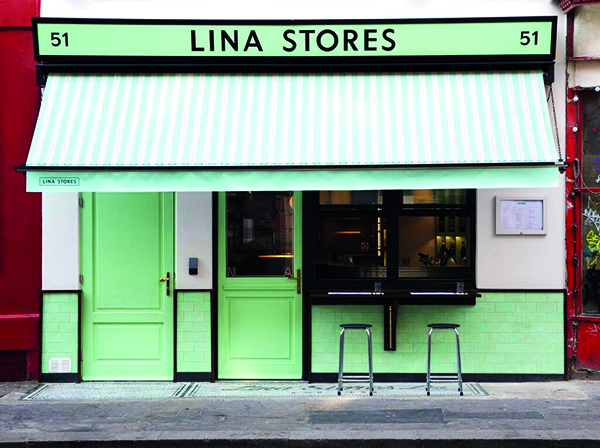 Iconic Soho delicatessen Lina Stores has launched its first restaurant, ‘Lina Stores – 51 Greek Street,’ with a menu inspired by the authentic ingredients that its Brewer Street store has become so synonymous with over the years.

Since original founder Lina opened the doors to the deli nearly 75 years ago, Lina Stores has become a Soho institution, providing homesick Italians and in-the-know Londoners with the very best ingredients that Italy has to offer. Head Chef Masha Rener fell in love with Lina Stores, the people and its unique atmosphere when she herself was a young Italian living in London and searching for authentic Italian produce nearly two decades ago.

After returning home to open a restaurant on her organic farm in Umbria, Masha remained a close friend and member of the Lina Stores family, as she travelled back and forth between the two countries sourcing ingredients, sharing recipes and visiting family who lived in the capital. It was only when Masha sold her restaurant and returned to London that the Lina Stores team finally decided to open a restaurant, with Masha at the helm.

Designed by Red Deer, with WFC as the main contractor, the interiors of Lina Stores – 51 Greek Street are influenced by the restaurants and cafes of mid-century Italy. The fifty-one-seat restaurant, set over two floors, is evocative of the original Lina Stores deli and its instantly recognisable green, white and polished aluminium aesthetic features throughout. Guests are greeted by an open kitchen surrounded by an intimate twelve-seat bar with reclaimed globe pendant lighting and leather stools. Striped green and white floor tiles lead guests down to the lower ground floor where a further thirty-six covers are divided between bar seating and green tiled banquettes, complete with traditional terrazzo flooring.

Speaking to Premier Hospitality magazine, Red Deer Director, Lionel Real de Azúa said: “The store is an institution in itself so there is 75 years of history there that we had to respect. The brief for the restaurant was to come up with a space that was an evolution from the existing brand and the existing shop but also make that very special for a restaurant and make it feel intrinsically Soho as well.

“We have done a lot of detail in the tables and have engraved the logo of Lina Stores into the marble– it is quite subtle around the perimeter of the tables. We have also incorporated a lot of small standout elements like tile banquettes in the basement and a coat rail where you can hang your coat or grab an Italian newspaper from. There are also a lot of mid-century moulding details that are peppered around the space – from the bar to the kitchen pass – which we hope bring to life the spirit 1944 in the current fit out.

“The project has been hugely important to us. We like working with brands and concepts that feel timeless and Lina Stores certainly is that. We don’t like the idea that architecture and fits outs are disposable so to design a restaurant that feels like it has been there for 75 years, just as the shop has, and probably intends to be, means a lot to us.”

The menu sees Masha recreate many of Lina Stores’ beloved classics alongside lesser-known regional specialities and family recipes handed down through generations. All pasta is hand-made every day at the 18 Brewer Street deli (as it has been since 1944) using Italian flour and fresh eggs.

Dishes include Tortellini and Gnocchi stuffed with fresh ricotta and white truffle. The prosciutti, cheese and antipasti that Lina Stores has become so famous for over the years will also be available as starters, alongside a small selection of carefully sourced Italian wines, classic Italian cocktails and much loved desserts.

“When Lina Stores was first founded, Soho was home to a thriving Italian community of Italian butchers, delicatessens, shops, restaurants and bars. Most of these independent businesses have slowly closed their doors but Lina Stores has remained a constant, a home away from home for many Italians like me in London,” said Head Chef Masha. “Many of our customers have been coming back to Lina Stores for years and by opening our first restaurant we are creating another destination where simple Italian cooking can be celebrated at affordable prices by all of our customers (old and new) for another 75 years.”