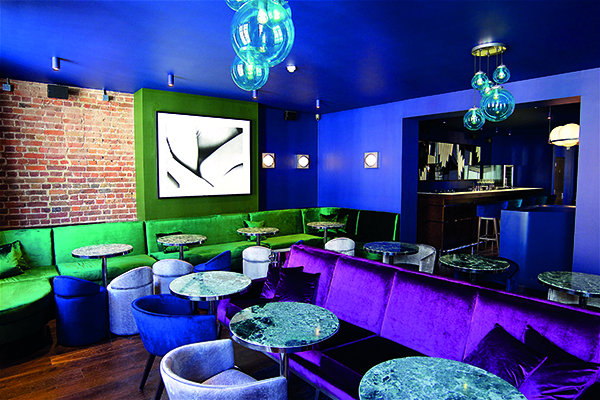 Gazelle, located on Mayfair’s prominent Albemarle Street, is a brand new joint venture from drinks specialist Tony Conigliaro and Chef Rob Roy Cameron. After months of anticipation and planning, Gazelle will open to the public on 9th July 2018.

Gazelle will be a stylish dining and cocktail destination, offering lunch, dinner and a selection of bar snacks.

Housed within a stunning 2,500 sq ft Georgian building, the two storey bar and restaurant includes generous high ceilings and exposed brickwork. The space was formerly used as a commercial space and most recently, a revolving art concept.

“This will be a bit of a new direction for me. I always wanted to open a place where the food stood equal with the drinks and would be a complete destination in its own right. With Rob, I’ve been lucky enough to discover someone who works and thinks like me and just gets it. We spent months looking at various sites but knew as soon as we walked into this one that it would afford us the space and scope to really make it into something special for both of us.”

Prior to the opening, the site has been significantly remodelled including a brand new design from award-winning design agency Shaun Clarkson ID. Founder Shaun Clarkson spoke to Premier

Hospitality about the work:

“I’ve known Tony Conigliaro for many years and we had always said we would work together on something. He’s very inspirational, clever and very clear on his vision, which is nice from a designer’s point of view.

“The brief was very much for something that was elegant, exclusive, secluded and high end. It’s on the first and second floor, which is a little bit unusual, and it’s the first time we’ve done a cocktail bar that isn’t street level. There’s a very discreet doorway, with some rather elegant handles, that leads into a lift which takes you to this amazing space. It’s a lovely Georgian, terraced building in Mayfair with fantastic double height ceilings.

“The biggest challenge was the Dolly Parton factor – fitting far too many things into a very small space! There are 74 covers plus standing and it had to be that for it to work as a business plan. There was also a lot of new M&E so it was quite complicated while trying to retain the height and elegance of the space.”

The first floor is more of a day time space featuring exposed brickwork with gold and deep pink walls, with velvet banquette seating and big cushions. In contrast to the first floor, the second floor is designed more with night time trade in mind including a colour palette of deep blue and deep green. Shaun added:

“The landscape is so dominated by chains these days, it’s very nice to have somebody with vision that you can work with on an individual basis to realise their ambition.”

Albemarle Street has transformed from a sleepy side street into one of London’s leading luxury lifestyle destinations, drawing both a well-heeled local and international crowd. Trophaeum has been responsible for the streets’ recent transformation, carefully curating the right brands, galleries and dining spots to attract visitors from day to night. Matt Farrell, director of Trophaeum said:

“We have a clear vision with Albemarle Street, to bring together the most exciting fashion brands, food and drink concepts and cultural outlets, to create a vibrant day-to-night destination for our local and international crowd. The creative energy of Tony and Rob is infectious, and their new concept is a perfect fit for Albemarle Street. We are excited to work with them both and look forward to welcoming them to 48 Albemarle Street in the coming months.”

A pioneer in the drinks industry for over a decade, Tony Conigliaro opened The Drink Factory in 2007. He then opened 69 Colebrooke Row in Islington in 2009 and the award-winning bars at both Zetter Townhouses in 2011, before going on to open Soho’s Bar Termini in 2015. Drawing on these experiences, Tony and Rob first joined forces in 2017 to open Untitled Bar in Kingsland, and now bring their combined talent to Mayfair for an entirely new venture. A flavour expert, Tony has achieved international acclaim for his approach to distillations, aromas and flavours of cocktails. Most recently he was awarded the Lifetime Achievement Award in the Class Bar Awards 2018.

Born in Botswana, Chef Rob Roy Cameron has travelled extensively and began his culinary career as a pastry chef, working under Ferran and Albert Adrià at Catalonia’s famous El Bulli. His career with the brothers continued with the opening of 41 Degrees in Barcelona, as Head Chef of the opening team aged just 26. After two years, he went on to head up Hoja Santa, which won a Michelin star a year after opening. Now in London he has worked alongside Tony Conigliaro at Untitled and Bar Termini and will be the Head Chef at this latest venture, Gazelle.

To keep up with the latest Gazelle news ahead of the opening, please visit www.gazelle-mayfair.com. 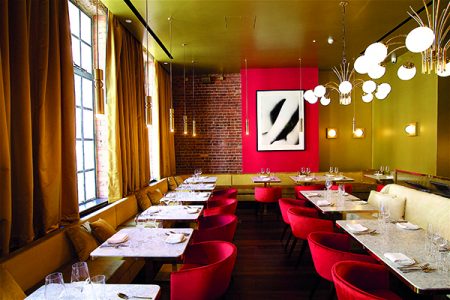 Founded 18 years ago, Hossack and Gray specialise in contract and domestic upholstery together with bespoke seating.

Hossack and Gray has offices in east London and the south west and has built a strong reputation on high standards, attention to detail and quality of service. The company boasts a team of skilled craftsmen with a variety of specialist talent.

Hossack and Gray has been involved with number of prestigious projects for prominent designers such as Absolut vodka bars and clubs for Shaun Clarkson ID; The Botanist for Russell Sage Studio; Kurt Geiger flagship store for Found; and Sackler and Serpentine Gallery for Peter Mikic.

Recently, the company was responsible for creating bespoke leather sofas and banquette built-in seating for Gazelle.

“It is always great to work with great designers on exciting projects like this. We love the high quality materials and finish being used throughout. We pride ourselves in quality craftsmanship and hitting deadlines!”