Online retail has enjoyed a +16.8% (YoY) growth during the first half of 2018, defying extreme weather events like the Beast of the East and various heatwaves to record strong sales results every month so far, according to the Capgemini IMRG eRetail Sales Index. This sits in stark contrast to the sustained downturn recorded on the high-street so far this year (Feb-Jun). H1 2018 e-retail has in fact seen the highest average H1 year-on-year growth since 2011, above the 5-year-average of 14.1%. The H1 average basket value was also at its highest for the decade at £94, and again outshines the 5-year-average of £85. 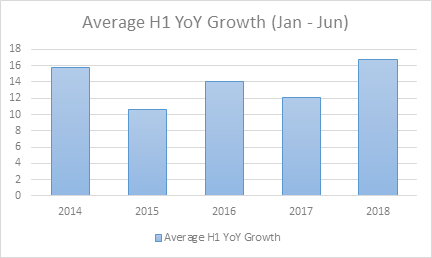 Despite the UK being hit by freak cold weather moving into Spring, online retail grew by +15.3% (YoY) between January and March, with the reduced high street footfall driving shoppers to home spending. However as the weather picked up and the UK experienced some unseasonably hot weather in April, online retail sales went from strength-to-strength, with a +18.2% (YoY) growth between April and June.

Despite the impressive growth of online retail, conversion rates for online retailers actually decreased overall every month other than May. This could be accredited to the continued trend of online shopping via smartphone devices, which are accounting for a larger share of total online sales but feature lower (albeit increasing) conversion rates. Indeed, spending via smartphone devices was up +39% against last year during Q2, although growth rates are inevitably starting to slow as this channel reaches maturity.

Andy Mulcahy, strategy and insight director, IMRG: “The performance for online sales in the first half of the year has been a lot stronger than anticipated. There are a number of factors that may be influencing that – the extreme weather events (both hot and cold), the Royal Wedding, World Cup etc – and it might be possible that the feelgood elements associated with some of those events has encouraged people to spend a bit beyond their means.

“This could mean that we see a pinch on shopper spend as we move through Q3 – though the weather in July has been incredibly hot – which may lead to an imbalance in online retail growth between the first and second halves of the year.”

Bhavesh Unadkat, principal consultant in retail customer engagement, Capgemini: “The year started with a lot of doom and gloom and uncertainty around retail.  What has been encouraging is how well online retail has performed in H1, particularly in seasonal categories like Clothing and Garden.  These two sectors have delivered higher basket values (+38.0% and + 19.6% YoY respectively), with consumers becoming impulsive in their purchases as they refreshed summer wardrobes and prepared for more time spent outside.

“Despite that online-only retailers outperformed multichannel retailers during most of H1, with average growth at +18.6% and +14.7% respectively, multichannel actually closed the gap on last year’s YOY growth. Basket value growth was also stronger for multichannel retailers, with a +4% (YoY) increase in average basket value to £100.77, compared to only +2% (YoY) for online only retailers at £87.77.  It demonstrates the continued importance of an omnichannel presence for retailers – a focus on connected retail will help ensure that the ecommerce sales performance outlasts the good weather.”