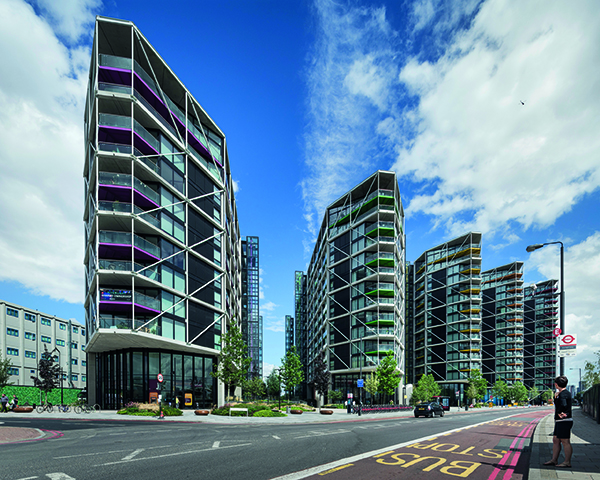 Winner of a RIBA National Award 2018, Riverlight is a mixed use development made up of six individual buildings ranging in height from 12 to 20 stories.

The bold architecture of each building was created by Rogers Stirk Harbour + Partners, who worked with EPR Architects on this standout riverside development. Alongside 806 residences, the scheme is also home to a local supermarket, a cinema, golf simulator, swimming pool, fitness suite and multiple bars and restaurants. Riverlight’s location on the banks of the River Thames has also been taken into account. The scheme incorporates a river walk and landscaping, with around 60% of it designated as public open space. Gillespies LLP was the project’s Landscape Architect.

The location has similarly informed the design of the 6 buildings, with inspiration taken from the industrial warehouse buildings that formerly lined the river. Each building is divided into three zones – top, middle and base. The lightweight, two-storey top levels feature gull-wing roofs. The mid-levels are represented as concrete floors expressed every two storeys, with intermediate floors expressed as lightweight steel balconies. The underside of the balconies and terraces, as well as other features such as the transparent lift shafts, have been given one of six colours distinctive to each building.

The north/south orientation of the buildings maximises both visual and physical permeability across the site, as well as creating a series of linear courtyards that open up onto the river.

For the landscape, each section of the scheme has its own distinct character. The river walk takes advantage of a previously underused part of the waterfront and provides a 17m wide boulevard.

Work to create Riverlight was carried out between 2009 and 2016. St James Group acted as the contractor for project.

Riverlight has formed a major part of Nine Elms on the South Bank, one of the largest and most exciting regeneration areas in the UK. In total, more than 42 projects are helping to radically transform the riverside district into a hive of activity and growth in the capital.