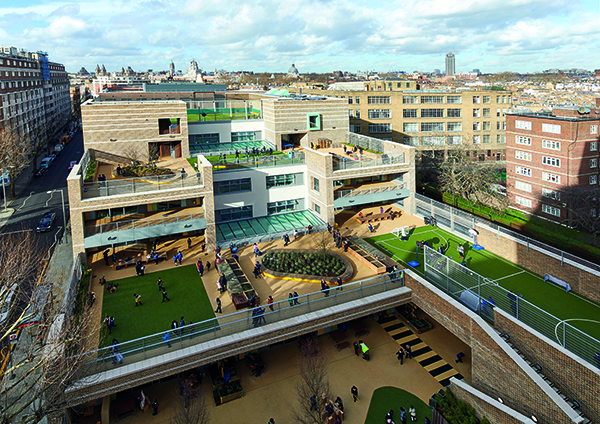 Winner of the RIBA London Award 2018 and RIBA National Award 2018, the new Marlborough Primary School in Chelsea, by architects Dixon Jones, is an education in exceptional design.

The project, for The Royal Borough of Kensington & Chelsea and delivered by Mace under the Southern Construction Framework, involved replacing a Victorian school building on a constrained site.

According to Project Architect Paul Jolly from Dixon Jones: “The project creates an inclusive and inspiring 21st century learning environment along with a commercial building and pedestrian link.

“The key challenge was how to achieve a significant increase in density on this restricted urban site, whilst creating a fitting and sustainable replacement for the original school.

“The concept features a series of cascading playgrounds which step across the site. The school has an expressive civic role with a rich palette of materials that seamlessly blend modern robust detailing with the historic local context.”

The redevelopment brief was extremely challenging. In addition to requiring a large primary school with over 2,500m² of external play areas, the local authority’s brief also called for a new commercial building (offices/ retail) and a pedestrian link to be provided across this constrained urban site.

The challenge was therefore how to achieve a significant increase in density within the 80 x 40m footprint, whilst also creating a fitting replacement for a Victorian School which has previously stood on the site since 1878.

Massing constraints posed by a 10 storey apartment block to the east, contrasted with a 5 storey blank party wall to the west, resulted in a stepped section across the site establishing a series of cascading ‘garden terraces’ offering a rich diversity of external play areas accessed directly from classrooms.

The school is organised around this vertical section, starting with the youngest pupils (3 – 5 years) at ground floor level, through to the junior pupils (9 – 11 years) at the top.

The stepped section allows larger communal spaces to be created underneath, where the main hall and multi-use space form the social heart of the school, lined with oak panelling and bathed in light from two central rooflights.

This ambitious scheme warranted extensive dialogue with the local planning authority. The building takes on an expressive civic role with a rich palette of materials that seamlessly blend modern robust detailing with the historic local context.

The design was developed to ensure the proposed massing and robust masonry detailing with characteristic stone banding, would serve to compliment both the original school and the wider local context, with the green glazed brick and circular windows referencing the polychromy of the 1911 Michelin Building nearby.

In contrast to the Victorian school which had stood behind foreboding brick boundary walls, the new building seeks to engage with the public realm with a welcoming a community entrance and playground gates.

Several of the historic keystones and plaques from the original school were rebuilt into the new facade to preserve the legacy of Marlborough School. 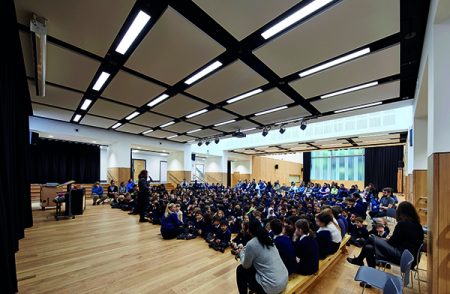