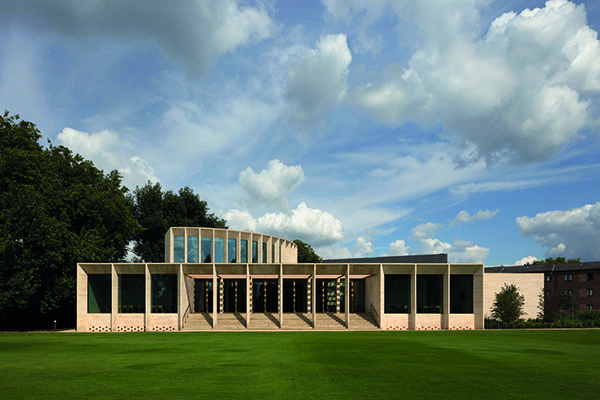 One of the most recent additions to the property portfolio of Worcester College, Oxford, the Sultan Nazrin Shah Centre is home to an auditorium, dance space, seminar rooms and an e-hub.

Carefully created by Níall McLaughlin Architects to respect the surrounding area, the building was completed in January 2017. Over a year later, the Sultan Nazrin Shah Centre continues to receive widespread praise for its standout design and has been the subject of numerous industry award wins.

In June of this year, the Centre was one of 49 projects to be awarded a RIBA National Award. This followed regional success in May when the project won both a RIBA South Award and the RIBA South Building of the Year 2018.

The origins of the build can be traced back to 2013 when Níall McLaughlin Architects was selected to design the Centre following a design competition. Its location is nestled into the treeline itself and overlooks to the spectacular Worcester College sports field whilst also forming a three sided quad to the east.

The location also had a significant impact on practical elements of the build. The building is raised on a podium, for example, to address the risk of flooding and roots of neighbouring trees. This was achieved through ground beams supporting dwarf walls beneath the precast concrete ground floor deck, from which a blockwork and steelwork structure rises.

The building is used for multiple purposes, including academic, conferences and local usage. As such, the internal layout was carefully planned. Gentle ramps ensure that there is step free access to all parts of the building while access to the stage is possible thanks to a recessed platform lift.

The Tuanku Bainun Auditorium can accommodate up to 170 delegates. It makes use of curved stone and is framed by a Clipsham stone screen to allow clerestory light into the space. At the lower level, the screen opens directly onto an oak-ceilinged foyer, extending out to pergolas and terraces overlooking a cricket pitch. A pleated ceiling in the theatre sweeps down to the stage. It can operate either as a fully enclosed, darkened environment or a bright day lit space surrounded by gardens.

Two seminar rooms that flank the terrace boast panoramic windows that make the most of the spectacular view. Both rooms can accommodate up to 20 people and include a boardroom table and a built-in screen with AV provision.

The main contractor for the project was Beard Construction. The Sultan Nazrin Shah Centre was officially opened in October 2017 by HRH The Duchess of Cornwall and HRH Sultan Nazrin. As part of the opening celebrations, the ceremony included a speech by the Sultan and the unveiling of a dedication plaque by The Duchess. There was also a theatrical performance by Worcester students in the Tuanku Bainun Auditorium.

The Sultan Nazrin Shah Centre is not the only Níall McLaughlin Architects project that has received national attention. The practice’s work for the University of Cambridge’s Jesus College West Court site was also the recipient of a RIBA National Award.

The development of the West Court site centred on a masterplan, that is to be delivered in three phases. Phase 1 of the masterplan involved work to collection of existing buildings set around a courtyard in a conservation area. Completed in April 2017, it took 18 months to complete and included of refurbishment and new build elements.

The refurbishment of the Grade II listed Webb Building handed over first, followed by the new café pavilion and basement bar. The converted Rank Building provides a 180-seat lecture theatre, research and teaching facilities, and hotel accommodation. It houses the Intellectual Forum, a research centre with global reach. The existing buildings are linked by a new extension containing reception, exhibition and conference facilities.