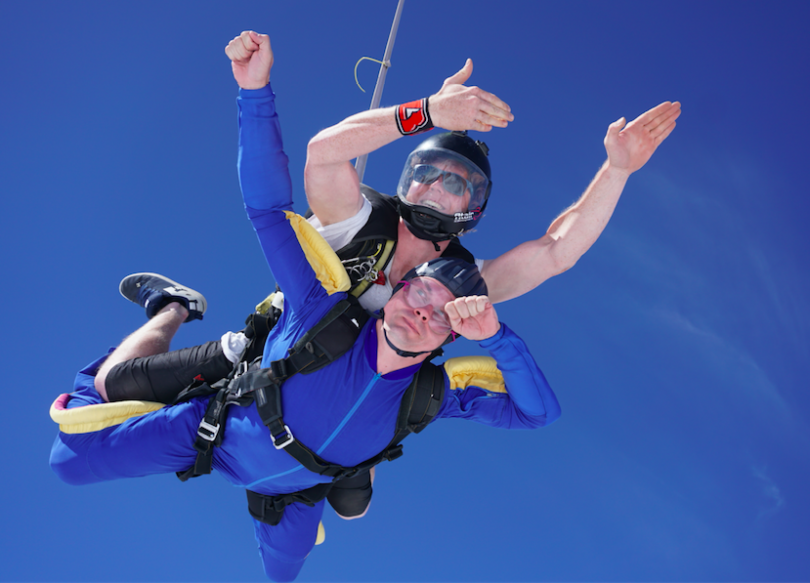 The General Manager for the Mercure Tunbridge Wells Hotel, Nathan Ruthven, has raised nearly £1,600 for children’s charity Rays of Sunshine by completing a personal challenge of skydiving for the very first time.

Nathan, who describes himself as far from an adrenalin junkie and avoids roller coaster rides at all costs, wanted to push himself out of his comfort zone (quite literally out of a plane at 12,000 feet) in support of the hotel’s new charity partner Rays of Sunshine.

As well as mustering the courage to gear himself up for the flight, and fall, of his life, Nathan also had the personal mission of meeting the strict weight restriction to complete the jump. Nathan overhauled his lifestyle in the months leading up, resulting in a commendable stone and a half weight loss.

Speaking on his accomplishment, Nathan Ruthven, General Manager of the Mercure Tunbridge Wells Hotel said: “It was definitely a challenge and an overwhelming physical and mental feat for me, I thought about pulling out several times but after witnessing some of the incredible things Rays of Sunshine do, I could not help but be motivated and inspired to do this. Completing the jump turned out to be one of the most invigorating things I have ever done, and is an achievement that my family and I are really proud of.

“I’m incredibly thankful to everyone who has supported and sponsored me, even if this makes a difference to just one child and puts a smile on their or their families face, then it’s been more than worth it.”

After smashing his initial target of £1,000, and with donations still pouring in, Nathan is already planning his next challenge for the charity. He has also inspired his colleagues and guests and has set the precedence for the hotel’s fundraising initiative very high.

Commenting on Nathan’s amazing contribution, Jane Sharpe, CEO for Rays of Sunshine said, “Rays of Sunshine is honoured and grateful that Nathan has achieved such a wonderful accomplishment and raised a fantastic amount for us. It is only with the support of our valued partners, such as Jupiter Hotels and all the individuals involved, that we can continue to make magical wishes come true and create special memories.”

Rays of Sunshine is a national children’s charity, which brightens the lives of seriously ill children (aged three – 18) and their families across the UK. Their work includes granting special wishes, working with children’s hospitals and hospices to host activity days and grant Hospital Ward Wishes as well as organising large-scale outings and events.

The Mercure Tunbridge Wells Hotel is part of Jupiter Hotels, who manage 27 Mercure and 2 Holiday Inn properties across the country. Jupiter Hotels officially named Rays of Sunshine as the groups chosen charity for 2018 and beyond.

The 4* Mercure Tunbridge Wells Hotel was built around an 18th century Georgian oast house in the Ken countryside and is one of the most desirable event venues in the area.