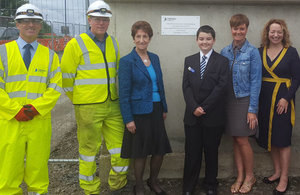 Future generations will get an exciting glimpse of life when work was taking place on the North East’s first ever triple decker roundabout.

Future generations unearthing a time capsule in 100 years’ time will get an exciting glimpse of what life was like back when work was taking place to build the North East’s first ever triple decker roundabout.

Highways England has joined forces with businesses and schools in North Tyneside to capture what it’s like living in 2018.

The time capsule has been buried on site of the A19 Coast Road scheme and to mark the burial, a special ceremony has been held today with an official plaque unveiled by Mayor of North Tyneside, Norma Redfearn.

Highways England assistant project manager Steven Cox said: “We have been really pleased with the contributions we have received from the wider community who have been so enthusiastic about this project and I’m sure when it is dug up in a 100 years’ time it will give a fascinating insight into how things have changed.

“There’s a wide range of items included from brochures and programmes to photographs and videos, so a big thank you to everyone. It was also a pleasure to invite the Mayor of North Tyneside, Norma Redfearn down to the site to unveil the official plaque today and to show her how work to create the triple decker junction is progressing.

“We not revealing the exact location of the time capsule to avoid it being dug up early and spoiling the surprise but this has been recorded by North Tyneside Council for when it is dug up in 2118.”

Elected Mayor of North Tyneside Norma Redfearn CBE said: “This really is history in the making. It’s a landmark project unlike any other in the North East and I’m delighted that local people have been able to get involved with filling and burying the time capsule.

“The work to provide the new triple decker roundabout will bring benefits not just for people living here and now but for many generations to come. It’s great to think that those same people will one day reopen this capsule and be able to appreciate what life was like as the project was taking shape.”

Work on the scheme is progressing and efforts to remove 80,000 cubic metres of soil to create the third layer of the junction is almost complete, further work such as drainage is also taking place.

The remainder of the project will include upgrading 1,175 metres of existing cycleway and adding a further 247 metres of cycleway to improve access round the junction. Work will also take place to install gantries which will display improved signage and surfacing of the new underpass and roundabout will be carried out. The scheme is due to be completed by the end of March 2019.