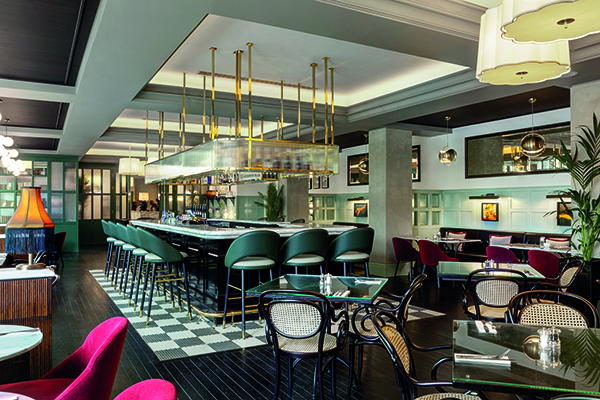 An impressive project to refurbish the public areas and bedrooms of the Green Hotel (formerly the Stephen’s Green Hotel) on Dublin’s Stephens Green has just been completed, creating a stylish and sophisticated new look for the three star plus venue.

The interior was designed by Bryan O’Sullivan Studio, with McStan as main contractors.

The project involved the complete re-design of the ground and basement level public areas, as well as the re-decoration of the 100 bedrooms, suites and corridors and the re-design of all the bedroom ensuites.

The project also added a new restaurant and bar, and a reading room where people can work.

Bryan O’Sullivan, founder of Bryan O’Sullivan Studio said: “The aesthetic has a simple yet sophisticated palette that mixes some traditional elements such as the painted timber panelling, high gloss bar front and patterned terrazzo floor, with some more contemporary finishes like the concrete wall cladding and marble monolith reception desk.”

As the hotel is in a modern building, the design features a good mix of the contemporary with some classical elements to make the space feel comfortable. A fresh colour palette of whites, greens and black was used creating a look that is simple, but has impact.

Bryan O’Sullivan continued: “The hotel is a hive of activity; the restaurant bar area serves from breakfast right through to evening drinks, so we’ve designed a really flexible space. We’ve also added a reading room purposefully located next to the windows, so that there’s a sense of activity and exchange with the city outside.

“We are delighted to see the completion of the project, it’s been rewarding to work on, and we hope that visitors and locals alike enjoy the spaces.

“We recently completed the Tamburlaine hotel in Cambridge, which has parallels with the Green Hotel. Cambridge is a fabulously popular city, as is Dublin, and our aim was to design public spaces that would be warm and welcoming.”

The project is part of The O’Callaghan Hotel Group’s recently completed €30 million facelift for three of its Dublin properties, with the other two being the Alexander and the Davenport.

The move was part of a €100 million investment programme which includes a significant amount already spent on building its new 155-bedroom Tamburlaine Hotel in Cambridge.

The O’Callaghan Hotel Group is one of the leading privately-owned hotel groups in Ireland. The group was established in 1990 with the opening of their first hotel, The Mont Clare Hotel in Dublin. Since then, the group has opened their three additional hotels in Dublin. Each hotel is unique in its style and offerings, from traditional to modern-contemporary and boutique style.

While developing its portfolio in Dublin, the O’Callaghan Hotel Group continued its expansion internationally by opening two international properties – the Eliott (Gibraltar) in 1996 and Tamburlaine (Cambridge) in 2017. 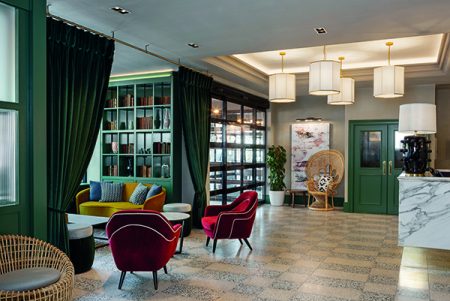