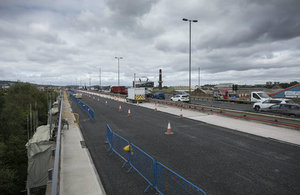 Repair teams are gearing up for the next phase of this mammoth scheme next month.

Highways England is calling on motorists travelling along the M5 in the Midlands next week to leave extra time for their journeys as the next phase of work on Britain’s biggest concrete repair project gets underway.

Work on one carriageway of the Oldbury Viaduct, between junctions 1 and 2, is nearing completion, and from Monday (3 September) the entire operation to repair the road will transfer from the southbound to the northbound carriageway.

The switching process will last around a week and to minimise disruption will take place gradually overnight to help ensure traffic can keep flowing during the day.

Two lanes will remain open in each direction during the switch although motorists should leave extra time for their journeys in order to familiarise themselves with the new road layout.

Highways England Head of Service Delivery, Andrew Butterfield, said: “We’re fast approaching completion of work on the southbound carriageway and the switch to the northbound carriageway will mean a new road layout. I would urge motorists to familiarise themselves with the layout and to leave extra time for their journeys as people get used to it.

“I appreciate it’s not been straightforward getting to this stage. We were only able to fully assess the condition of the southbound carriageway once the work had started and found around 6,000 individual repairs were needed, which is 4,500 more than anticipated. To add to the challenges, we had one of the harshest winters, followed by warmest summers in years.

“As a result, work on this section has taken longer than expected, but we’re committing every resource available to get this work done as safely and quickly as possible.

“We understand the level of disruption this project involves, and we’d like to thank motorists, businesses and residents for their patience.”

At more than £100 million, M5 Oldbury is believed to be the largest concrete repair project, by value, ever carried out in Britain. At the same time, it is also thought to be the largest scaffolding project in Europe, with over 400 hundred miles of scaffolding erected, enough scaffold boards to cover seven football pitches and enough scaffold staircases to reach the top of Ben Nevis and Snowdon.

Much of the work takes place underneath the viaduct and so the workforce, averaging around 500 people, cannot always be seen by the travelling public.

To keep the motorway open during the work, a contraflow system is currently in place with traffic using the carriageway with two lanes operating in each direction, along with a 30mph speed limit.

Slip roads at junctions 1 and 2 will remain open once the switch takes place to ease effects on the local network. When the main concrete repairs are completed, the M5 will return to three narrow lanes in each direction so that work, including central reservation upgrades, can take place. For more information about the work at Oldbury viaduct visit https://www.highwaysengland.co.uk/oldburyviaduct.