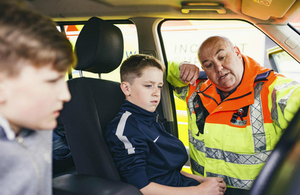 A young fan has enjoyed a surprise visit to meet the stars behind a rating winning documentary series which focuses on the country’s longest road.

Jack Ryding, who is 12 and lives near York, is an avid viewer of the BBC documentary A1: Britain’s Longest Road which features Highways England traffic officers helping people on the A1.

Traffic officers who patrol the A1 organised the visit to the regional headquarters in Wakefield for Jack and his friend Freddie Marshall (12) to let them see for themselves what really goes on behind the scenes.

Series 3 of the show – which is currently airing on BBC1 at 11am and attracts around 1.5 million viewers per episode – focuses on the people working round the clock on Britain’s longest and most iconic road.

Alongside traffic officers the series also features maintenance teams from across Highways England who keep the road running.

Jack said: “I really love watching the documentary and coming to the North East control centre and meeting the team involved has been a great experience.

“I loved being in the traffic officer vehicle and sounding the bullhorn and meeting the staff in the control room to look at what really goes on behind the scenes.”

Jack got to sit in the traffic officer vehicle, visit the control room and chat to the camera operators.

He also got a miniature traffic officer vehicle to take home as a souvenir of the day.

Highways England regional director Richard Marshall said: “The series has really captured the imagination of millions of BBC viewers of all ages, but at just 12 years old, Jack must be one of our youngest fans.

“Like so many other viewers, I am delighted that Jack is enjoying the programmes and appreciating the fantastic work which Highways England traffic officers and the rest of the team play in keeping the A1 safe on a daily basis.”

The series is airing each day on BBC1 at 11am and will be on until Friday 12 October.