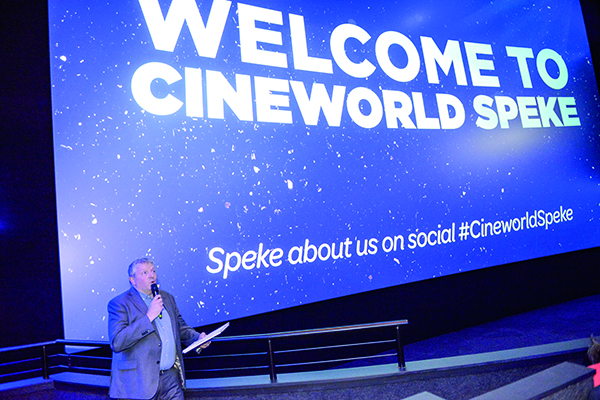 Cineworld Speke has opened in New Mersey Shopping Park with a Starbucks, Superscreen and Screen X.

Cineworld, one of the UK’s leading cinema chains, has opened its latest cinema in Speke.

All screens deliver crystal-clear laser projected images and powerful digital sound systems, perfect to watch upcoming blockbusters including The Meg and Ant Man and The Wasp, both of which showed during the cinema’s opening weekend. All seats at the cinema are premium red leather and have the option to recline. The paperless cinema includes digital ordering screens for tickets.

Praised as one of the biggest screens in Merseyside the Superscreen offers state-of-the-art laser projection and sound. Superscreen includes a wall to wall, ceiling-high screen and breath-taking multidimensional Dolby Atoms sound.

The latest tech innovation introduced to Cineworld, ScreenX is the world’s first multi-projection cinema technology expanding the traditional cinema screen to the side auditorium walls, creating a 270-degree viewing experience for the audience. Developed and originally launched in South Korea, Cineworld Greenwich O2 was the first UK cinema to install the new technology along with Cineworld Speke.

The innovative technology uses an array of projectors and with proprietary ScreenX software, blends multiple images into one seamless image extending from the central screen out. ScreenX walls are installed with a fabric to ensure brightness and colour closely match the

content on the main screen and extend the length of the auditorium. Strategically placed audio systems and speakers ensure that sound does not compromise the immersive viewing experience.

Andrew Starkie, Cineworld Speke General Manager commented: “We’re thrilled to have opened Cineworld Speke. With such an exciting line-up of films, we can’t wait to welcome the local community to share our love of films.”

Moviegoers can also enjoy a Starbucks café, Baskin Robbins ice cream counter and Pick and Mix selection. The Starbucks will have both indoor and outdoor seating, as well as a terrace which will be based on the dome side of the building.

Plans to bring a cinema to the area were announced over two years ago along with a number or restaurants including Nando’s and Wagamamas which opened in June.

Cineworld aims to be the best place to watch a movie, offering an unparalleled cinema experience in the UK & Ireland, with 98 cinemas and over 1,017 screens. Cineworld Group was founded in 1995 and is currently the second largest cinema chain in the world following the acquisition of US cinema group Regal Entertainment Group in February 2018. In 2014, the Cineworld Group combined with Cinema City International (CCI) and appointed CCI Founder and CEO Moshe (Mooky) Greidinger, as CEO of the Cineworld Group.

In August 2016 Cineworld acquired 5 Empire Cinemas, including the iconic Empire Theatre in Leicester Square. This was followed by the acquisition of Empire Newcastle in 2017.

For more information on Cineworld Cinemas and to book your tickets at Cineworld Speke, visit www.cineworld.com. 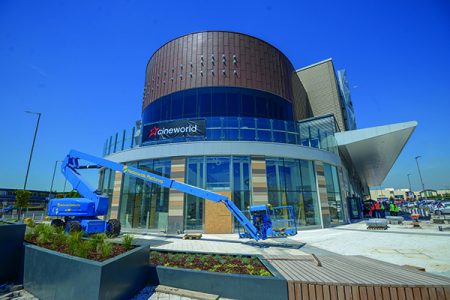