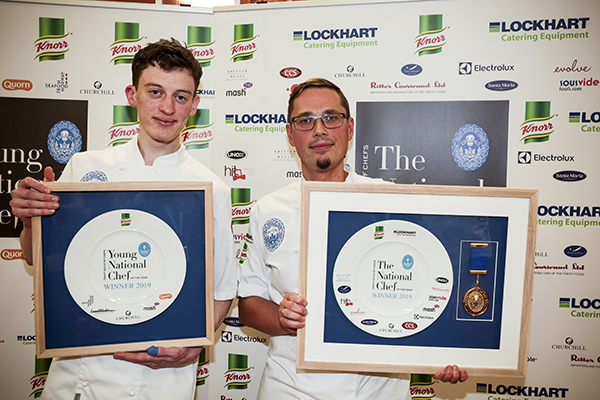 Eight months after the Craft Guild of Chefs began its hunt for the most up and coming chef in the UK, Kuba Winkowski, head chef from The Feathered Nest Inn has been crowned the new The National Chef of the Year. Kuba served a menu of Native Lobster, Oyster Emulsion, Celery, Sea Herbs Buttermilk followed by Yorkshire Grouse, Cabbage, Foie Gras, Quince, Celeriac, Seeds and Sticky Toffee, Lemon, Clotted Cream and Walnuts for dessert. His dishes were ranked the tastiest by 21 of the UK’s best chefs, overseen by Gary Jones, executive chef from Belmond Le Manoir aux Quat’Saisons.

In the runner-up spot was George Blogg, head chef at Gravetye Manor with Derek Johnstone, head chef at Borthwick Castle taking the final podium place at The Restaurant Show.

Today’s cook-off was the grand finale after a series of rigorous challenges which the ten finalists have undertaken during their culinary journey. It started with an online entry in February where chefs were tasked with devising a three-course menu for two guests. Judging of the menus was completed anonymously and then the top 40 chefs battled it out at either Sheffield College or Le Cordon Bleu in June, to be whittled down to just ten. The panel of judges for today’s final included Tom Kerridge, Clare Smyth, Claude Bosi, Jonny Lake and Paul Ainsworth.

Commenting on the standard of cooking he’d seen and tasted today, chair of judges for The National Chef of the Year and executive head chef at Belmond Le Manoir aux Quat’Saisons Gary Jones said: “This has been a fantastic The National Chef of the Year final, with an exciting line-up of chefs from a variety of sectors. The chefs have really thought about the brief I set at the mentor day. As always, it’s been good to see former finalists returning as this shows persistence and tenacity, which is what every talented chef needs. As chair of judges, I didn’t make it simple by choosing lobster and grouse, both are easy to get wrong on the day, especially under the pressure and in a completely different environment to normal. Kuba was frustrated after last year, not because he didn’t win but because he wanted to be better. He’s gone away and thought about what he could achieve with real determination, ambition and competitive spirit. He’s sharper and fitter than he’s ever been so he could be the best chef possible and he absolutely deserved to win today.”

David Mulcahy, chef organiser of The National Chef of the Year Award and Vice-President of the Craft Guild of Chefs added: “All ten finalists have done an incredible job, not only today but throughout the competition. To get to this stage, you’ve already beaten some of the UK’s best chefs. At each stage of the award, competitors have had the opportunity to connect with other chefs, judges and suppliers and this has helped them grow both personally and professionally. Each year we look for ways to develop this award and the Guild has recently enjoyed some inspiring discussions and debates on topical issues such as the chef shortage, PR and sustainability. These finalists are true ambassadors for the hospitality industry and we’ll be watching their careers with great interest.”

Straight after his name was announced Kuba Winkowski told us: “I am obviously super happy but for me the feeling of relief is immense. Coming back for a second time really helped because this time I knew more about the venue and the whole competition experience. This meant I only needed to think about the cooking. Winning isn’t just about me as I have an amazing team around me and it takes dedication from us all, including my commis chef who has worked with me for hours on end over the last few weeks. Everyone who knows me will be sick of lobster and grouse as I’ve made them taste my dishes over and over again. I am just so relieved the practice has truly paid off.”

The title of ‘The National Chef of the Year’ is always the most sought-after prize but the overall winner will also enjoy an extensive list of gifts including:

Earlier today ten chefs aged 24 or under also battled it out to take The Young National Chef of the Year title. Henry Wadsworth, chef de partie from Belmond Le Manoir aux Quat’Saisons was announced as The Young National Chef of the Year winner after serving up a menu of Baba Ganoush, Medjool Dates, Preserved Lemon, Tempura followed by Poached Halibut Veronique, Suffolk red grapes, cucumber and Verjus with a Caramelized Pear Tart for dessert. Aaron Middleton, sous chef from Hide Above was revealed as the runner-up with Conner Farrer, chef de partie from The Ritz in London being announced in third place.

Chair of judges and ambassador for The Young National Chef of the Year competition, Mark Sargeant said: “The standard was really high today and the competition was close, especially for second and third. However, for me Henry was really on form and deserved that top spot. He’s been a part of the competition for two years but today he just nailed it.  His food was simple, delicious and spot on and as soon as I had tasted his three fantastically consistent dishes it was clear he was the winner.”

Each year, competition sponsor, Churchill awards a prize for the best presentation of the day for a starter, main course or dessert. The winner could be from either the young or senior competition and votes are made on social media. At the awards ceremony, Derek Johnstone from Borthwick Castle was announced as the winner of the ‘People’s Choice’ Award for exceptional presentation of his starter in The National Chef of the Year competition.