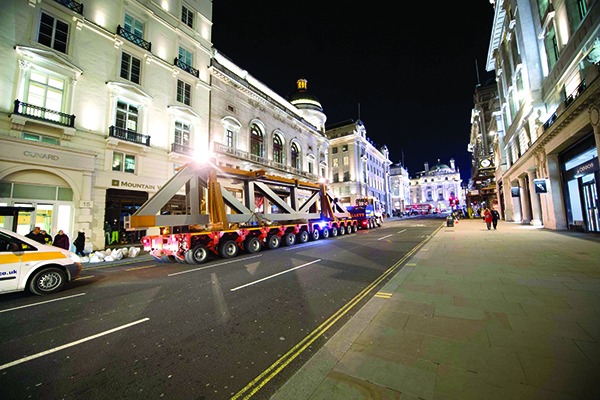 With fabricated steel props and trusses, Northallerton based structural fabrication specialists Allerton Steel appointed Collett & Sons Ltd to undertake the intricate delivery of thirteen cargoes destined for the Leicester Square Hotel construction site in the heart of the capital.

Initial route studies and swept path analysis reports were undertaken by Collett’s Consulting Team analysing several routes within the M25 London area to identify the most suitable path for the loaded vehicles to take. With the delivery site in the heart of Leicester Square Collett was faced with an extremely narrow access via Orange Street off Haymarket.

As a result, Collett carried out detailed negotiations with the Metropolitan Police, Transport for London, London Boroughs, London Underground, Network Rail and Canal & River Trust. Collett proposed routing within the London area to avoid any specific weight limits and restrictions.

One particularly intricate area to navigate would be that in the vicinity of Victoria Station and Parliament Square and as a result Collett put forth the idea of using The Mall as an alternative. This required Collett to approach The Royal Parks to apply for access to utilise The Mall through St James’s Park.

This would see each of the six truss movements approaching from Buckingham Gate, along The Mall before travelling through Admiralty Arch, allowing us access to Trafalgar Square and onwards to final destination.

The Royal Parks approved the request to utilise The Mall for this project, under the proviso that each vehicle did not exceed 10mph.  With this final routing approval in place Collett had their permitted route through the capital, approaching London from the West.

In order for the vehicles to negotiate the final section of the route from The Mall through Admiralty Arch and onwards to Leicester Square, parking bay suspensions were implemented in Waterloo Place and Haymarket. The Transport for London Santander cycle hire docking station on approach to the development site in Panton Street was suspended, along with the temporary removal of the cycles and one docking station end post.

Taxi rank suspensions were also required in Regent Street along with street furniture removals at the junctions of Jermyn Street and Haymarket, Haymarket and Orange Street.

The deliveries of the props from Middlesbrough to London took place over four consecutive days in January 2018 with the trusses following shortly after in mid-February over three consecutive days.

To comply with strict site operating time limits and curfews on the site in Leicester Square, the final delivery programme for the trusses required two loads over three consecutive evenings.  The first delivery arrived at 21:00 hours with the second following two hours later at 23:00.

In order to achieve these timings, a dedicated parking location for the loaded vehicles was agreed in Colnbrook, just outside the Metropolitan Police area and 20 miles from the delivery site. This would allow for the vehicles to arrive the day prior to the agreed delivery slot, on the day of delivery each vehicle would leave the parking location at 18:30 and 21:00 respectively to arrive on site to the agreed timescales.

Deliveries of the trusses from Colnbrook into London commenced on a Wednesday evening.  On each occasion the 21:00 hours delivery was unloaded on arrival with the empty vehicle departing site before 23:00 hours. The 23:00 hours delivery would then arrive and wait on a closed off section of Orange Street until 18:00 hours the following evening when unloading would take place.

The empty vehicle would leave the construction site after 19:00 hours so as to comply with Metropolitan Police restrictions within Central London. This process continued for three consecutive nights, with the loads on the Friday being delivered and unloaded on the same night to avoid any Saturday unloading and conflict with the upcoming Chinese New Year Celebrations.

All empty vehicles had to be routed, notified and escorted out of the capital, utilising the pre-arrange use of the dedicated Transport for London Bus Lane to gain access from the bottom of Haymarket to Trafalgar Square before continuing via Whitehall, Parliament Square, Victoria, Hyde Park Corner and the A4 Westbound out of London.

After the months of planning and liaising with all other invested parties, Collett’s Team delivered all thirteen of the cargoes directly to the construction site over a period of seven days.