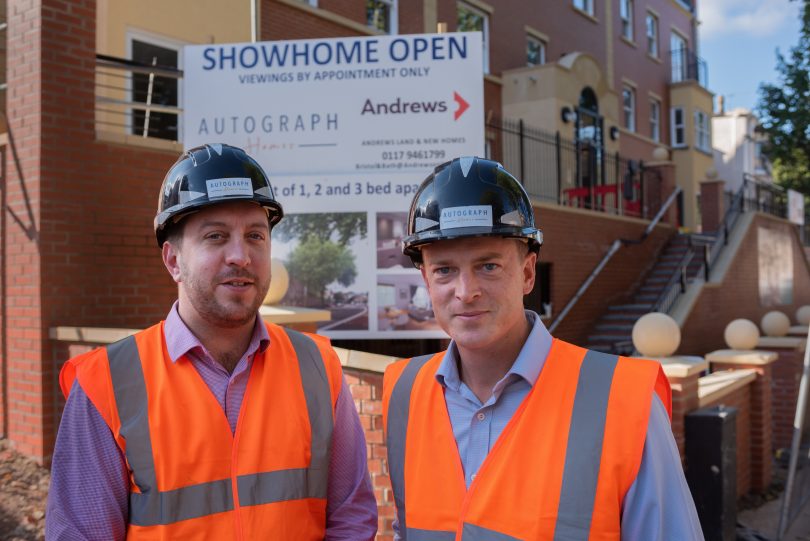 Independent regional homebuilder Autograph Homes is celebrating its second year in business with rapid sales and a double award nomination at its latest Bristol development.

The Old Library development of 36 apartments in Cheltenham Road is up for awards from both the Building Safety Group (BSG) and major warranty provider Premier Guarantee.

A mixture of high quality work and health and safety planning, specifically regarding the fire risk to timber frame in an urban environment, has led to the nominations, the results of which will be decided at separate award ceremonies later this month and in early November.

“Work’s nearing completion, the show home opened in July and of the 36 apartments which we put up for sale in March only four are now left, with two of those are under offer. We suspected the flats would go quickly and we’re pleased to have been proved right.

“Great credit must go to the site team, in particular the rigorous and efficient work done by our project manager Richard Sanders and site manager Tim Jones.

“Together they have delivered a unique, contemporary and beautiful development, which suits the surrounding environment and offers attractive city living in one of Bristol’s most popular and sought after neighbourhoods.”

Autograph Homes, which is based in the Ashton area of Bristol, started life in October 2016 with a development of eco homes at Players Close in Hambrook. The business launch followed significant investment from the Housing Growth Partnership.

The Cheltenham Road development is its second site in the Bristol area. Construction work on the project started in July last year.

Following its successful second year in business, the developer has now appointed Stephanie Probets as sales manager and has also identified a new site for development near Bradford-on-Avon.

Mr Taylor said: “Steph has over 10 years of experience in residential sales, a strong background in the new build industry and a wealth of knowledge in the property market in Bristol and Somerset.

“She has a passion for detail and quality, a strong customer focus and desire to ensure the Autograph Brand and the high-quality homes are well promoted.

“Her role will be to head up our sales and marketing efforts, as well as offering support to new home owners at every step of their journey from initial contact through to after sales care.

“Her appointment marks a further milestone for us, as we move into our second year and look to broaden our reach in the region.

“The development site we have identified near Bradford-on-Avon is a really exciting one and we’re looking forward to releasing further details about that soon.”

Further details about the industry awards for which The Old Library is nominated are as follows: