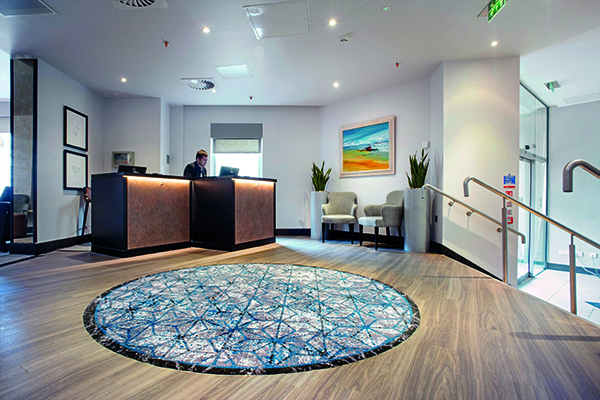 Major expansion to an Edinburgh hotel that puts profits back into advancing surgical standards worldwide has been completed in a project making it the city’s largest independent hotel.

Following record occupancy numbers, Ten Hill Place in the heart of the Old Town has increased its capacity to 129 rooms – close to a 70 per cent increase on its previous provision of 77 rooms.

Main contractors for the project were Thomas Johnstone Ltd; architects were JM Architects and interior designers were Occa.

Owned by the Royal College of Surgeons of Edinburgh (RCSEd) the hotel has expanded into the adjoining five storey Surgeons Hall building, doubling the size of the ground floor public areas and adding a further 52 bedrooms. Surgeons Hall is also currently owned by the RCSEd and was previously used as offices and by academics. The hotel is operated by the college’s commercial arm, Surgeons Quarter.

The RCSEd team wanted to create a high-end offering which would appeal to tourists but would also offer rest and relaxation to conference guests and the surgeons and medical personnel who use the hotel regularly. The interior design concept needed to have relevance to the college and a strong sense of local identity, without using the obvious surgical associations.

Research established that the site of the hotel and adjacent Surgeons Hall had operated as a Riding School before the current Surgeons Hall building was opened in 1832. Rich in heritage, local identity and the opportunity to create an elegant design solution, this equestrian concept was welcomed by the client team.

The materials palette references equestrian associations throughout, reinterpreting the obvious to create to a refined scheme perfect for an elegant contemporary hotel, from the black metalwork to the exposed stonework, to the rich leather upholstery and aged timber floors.

Buckle details, saddle shapes, diamondback quilting and stable doors have all influenced the furniture selection and design, creating interiors which are subtle, understated and beautiful. The colour palette is predominantly grey, orange and teal.

Scott Mitchell, Commercial Director, said: “The hotel was previously running at around 88 per cent occupancy and we decided that it was worthwhile expanding.

“As well as adding new bedrooms, the project provided extra space for the restaurant which expanded from 50 covers to 150, a brand new open plan guest lounge, a much larger bar space, a huge new kitchen and a private function area known as The Snug, featuring attractive exposed original brickwork.”

The project involved a significant amount of stripping out and re-design of the original space which had previously been offices. Rooms include the Skyline Junior Suites and Skyline City View, which have windows all around, offering panoramic views of Edinburgh.

The expanded restaurant spans the entire ground floor of the existing and new areas, some of which were originally bedrooms, which were removed to make way for the new space.

Externally, some of the building was re-painted and new windows were installed, including new loft style windows on the fifth floor.

Scott concluded: “The project has incredibly transformed the hotel and we are very pleased with it. The main contractors and project team did an excellent job and we have had some very good feedback from guests – with previous guests blown away by the hotel’s new look.

“This is a very important project for the hotel. We opened on 1st of August and have been running at 90 per cent capacity throughout the month – which speaks for itself.”

The hotel has grown in popularity year on year – helped by highly positive TripAdvisor reviews. 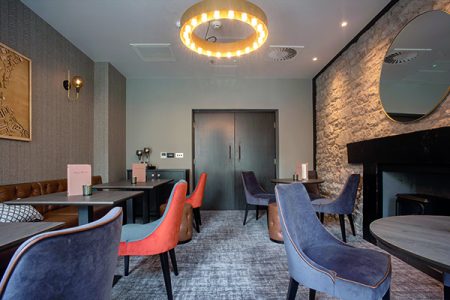 “At Newhey Carpets, we pride ourselves in our quality and service. All our carpets are manufactured in the UK by our dedicated team of experts using the highest quality wool rich yarns all sourced from local suppliers.

“Our specifications have been engineered to offer value for money and outstanding performance. We also apply a sustainable backing called ‘evobac’ to all our carpets which is produced from post-consumer recycled PET – every square metre of carpet we produce prevents at least 8 plastic bottles from going to landfill or entering our oceans – making our carpets a sustainable choice for specifiers and end-users.”

To find out more about Newhey, visit: www.newheycarpets.co.uk. 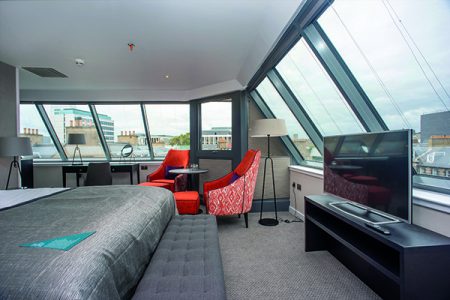