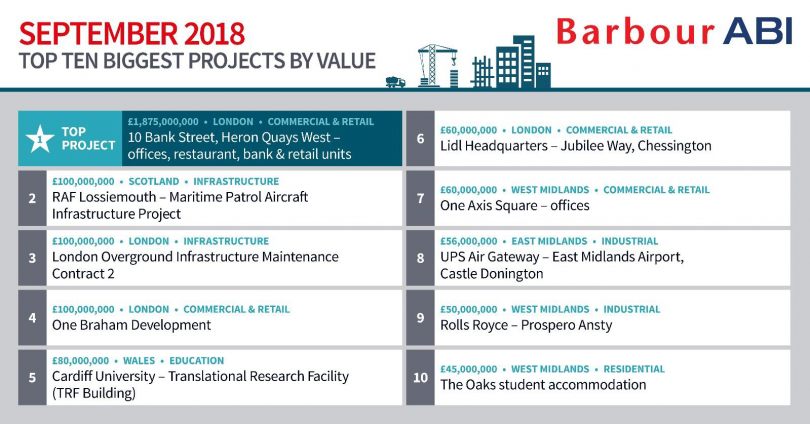 The value of new construction contracts in September reached £5.6 billion, a 6.1 per cent decrease compared to August but the second-best performing month of 2018 so far, highlighted by contracts worth over £800 million for commercial and retail construction.

The latest edition of the Economic & Construction Market Review from industry analysts Barbour ABI highlights levels of construction contract values awarded across Great Britain. The largest project in September was the £187.5 million 10 Bank Street mixed-use development in London, almost double the value of the second largest project on the month. With three of the four largest projects in September based in London, this greatly helped the capital account for the largest share of contracts awarded on the month, with a total of 18.2 per cent, followed by the South East with a 15.3 per cent share and then the North West with 13.1%. 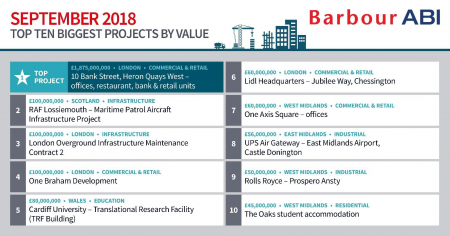 Across the construction sector in September, commercial and retail projects reached £814 million, its best month since July 2016. 75 per cent of these projects were office-led, such as the £60 million Lidl Headquarters development in Chessington. Infrastructure and residential, the two largest sectors within construction, both saw decreases last month, 11.7 and 5.9 per cent compared to the figures from August.

Commenting on the figures, Michael Dall, Lead Economist at Barbour ABI, said: “The last three months has seen a renaissance for commercial and retail construction, with various large projects commissioned and a growing flow of confidence back into the sub-sector. However industrial was the only other sub-sector to see any sort of growth in September, as bigger sectors such as infrastructure and residential are struggling to break the monthly £2 billion contract value barrier consistently, an achievement that was found more regularly in 2017.”