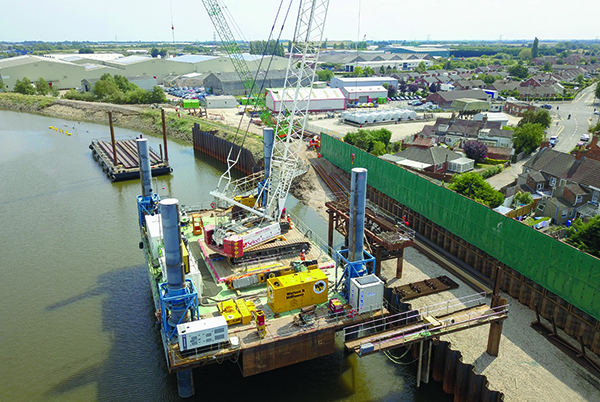 Geared to reducing the risk of tidal flooding to over 14,300 properties in Boston, Lincolnshire, the £100m Boston Barrier project is of crucial importance to the town, which suffered severe flooding in 2013.

The floods affected over 800 town centre properties following overtopping of flood defences in a tidal surge.

The barrier’s new 25-metre wide hydraulic-powered gate, when not in use, will lay flat on the riverbed out of sight, but will be raised to close off the River Witham when flooding is expected, preventing high tides on the North Sea from overtopping defences in the town.

The scheme is a partnership between the Environment Agency, Lincolnshire County Council, Boston Borough Council and Black Sluice Internal Drainage Board.

The project is being carried out by a joint venture between BAM Nuttall and Mott McDonald.

When the barrier is built and the banks immediately downstream are raised, Boston will be protected from a tidal surge with a 0.3% annual probability (or 1 in 300 chance of happening in any one year).

“Enabling works included the diversion of 3 11 Kv power cables from the existing flood banks; Phase 1 dredging; the demolition of 2 grain towers – one on the left bank of the River Witham and the other on the right bank; the demolition of a disused ship loading quay, and minor demolition on land where the scheme’s new control building is to be built, as well as the construction of the building’s foundations.”

Other works include the installation of a primary flood barrier; the construction of sheet piled flood walls on the right bank of the River Witham, with a combination of reinforced concrete flood walls and gates being installed on the left bank up to an existing outfall structure known as the Maud Foster, connecting into a new wet dock vertical sector steel entrance gate at the Port of Boston.

Adam Robinson added: “The project is going well. Currently the right bank anchor sheet piles are being installed, together with a steel sheet pile coffer dam which will be closed off and dewatered later this year.

“It was also necessary to re-locate a fishing fleet from the area of the works to a temporary quay downstream.”

Speaking at the start of the works, Floods Minister Thérèse Coffey said: “This Government investment will make sure Boston is one of the best protected towns on the east coast.

“The Boston Barrier is part of our plan to invest £229 million over the next four years to make sure the risk of flooding to 49,000 homes and businesses in Lincolnshire is significantly reduced.

“It is expected that works will be complete by the end of 2020, and will make Boston one of the best-protected areas from tidal flooding outside of London.”

Toby Willison, Executive Director of Operations at the Environment Agency, said: “This state-of-the-art defence will help protect Boston’s communities and businesses from the kind of flooding the town experienced in December 2013.

“It’s yet another example of the brilliant work our teams are doing up and down the country to better protect people from flooding, and recently we’ve reached a milestone of an extra 100,000 homes protected.”