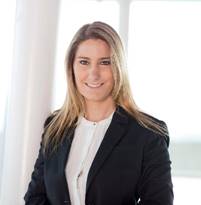 Hotel Schweizerhof Bern & THE SPA (www.schweizerhof-bern.ch) has announced the appointment of Michèle Liebermann Dreier as Director of Sales & Marketing at the five-star superior hotel from the 1st December 2018.

After various positions within the hospitality industry, Michèle Liebermann Dreier worked for the past three years as Head of Sales and Booking at Kongress + Kursaal Bern AG. She graduated from the prestigious Ecole Hôtelière Lausanne and graduated in 2010. She succeeds Dominique Haslebacher, who decided to leave the Hotel Schweizerhof Bern & THE SPA at the end of October.

“We thank Dominique Haslebacher for the great cooperation and wish her all the best for the future. With Michèle Liebermann Dreier we have found an experienced, motivated and communicative personality. We look forward to the future“, explains Iris Flückiger, General Manager.

The Hotel Schweizerhof Bern & THE SPA is part of the Bürgenstock Selection headquartered in Zug, Switzerland. The five-star superior hotel offers 99 rooms and suites, an 800 m2 conference centre with 11 halls and rooms, including the legendary “Trianon” ballroom, the Jack’s Brasserie restaurant, which has been awarded 14 Gault Millau points, a cigar lounge, a 500 m² spa and an unparalleled sky terrace.

The company portfolio includes the Hotel Schweizerhof Bern & THE SPA, the Royal Savoy Hotel & Spa Lausanne (196 rooms) and the Bürgenstock Resort Lake Lucerne which opened in August 2017 (383 rooms). The total investment volume of the Bürgenstock Selection is one billion Swiss francs.