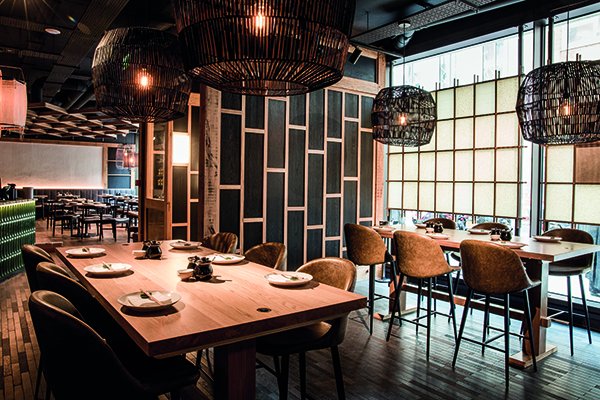 Flesh & Buns Fitzrovia launched in September in the Copywright development on Berners Street. The brainchild of acclaimed chef Ross Shonhan, founder of the Bone Daddies Group, Flesh & Buns Fitzrovia offers a menu of Peruvian Japanese dishes. The dishes were inspired by Ross and his team’s recent research trips to Peru.

The restaurant differs from the original in that it explores Nikkei-cuisine, whilst also staying true to the izakaya Japanese pub experience that has built such an incredible following since its opening in 2013. Nikkei-cuisine has formed organically over the past 100 years.

The 170-cover restaurant sits across one floor and is divided into three sections using oak posts and panelling, inspired by Japanese architecture. On arrival, guests are welcome to enjoy a drink at the dedicated bar area or at one of the 15 bar seats. To the right of the reception, the front dining area is separated from the bar and the back of the restaurant to allow for intimacy and to further emulate the izakaya feel.

To find out more about the design, Premier Hospitality spoke to lead designer Mike Duncalf:

“This was a completely new challenge for us! As big fans of both Bonedaddies and Flesh & Buns we had been talking to Ross for a while and expressing our interest to work with him. We were delighted when Ross called at the end of last year and asked if we could help him create a flagship Flesh & Buns restaurant in Fitzrovia.

“As ever with a project like this, the starting point was to fully understand the operation, get to grips with the Japanese Izakaya concept and ambience and Ross’s vision for the new location. Naturally this involved fully immersing ourselves in the food and drink!

“While it was important that the new Flesh & Buns restaurant should relate to the first restaurant it was very important for us to move the concept into new ground. The location for the new restaurant couldn’t be more different from the original which was in a basement with low ceilings and no natural light the new location is at street level with a glazed facade and lots of natural light and very open to the street.”

On the menu is a selection of ceviches, tiraditos, and maki rolls, all created for diners at the open kitchen counter. These include ‘Shellfish Ceviche featuring Whelks and Cockles’ and ‘Plaice Tiradito with Truffle Ponzu and Yuzu Tobiko’. There is also a large range of hot dishes available to customers, with a specific focus on smoked meats served with bao buns.

After 8-12 hours of smoking in Ross’ new wood smoker, dishes such as, ‘Chilli-Miso Smoked Brisket with Chipotle Miso BBQ Sauce & Pickled Red Chillies’ and ‘Shichimi and Sansho Pepper Jerked Duck with Coal Roasted Peach Chutney’ are created for diners to experience, alongside a basket of freshly-steamed bao buns. In addition to the smoked meats, Ross has established a collection of exclusive fish and meat dishes for the restaurant.

These include ‘Tempura Plaice with Yuzu, Honey & Rocoto Pepper Sauce’, ‘Katsu Rabbit Leg with Apple and Fennel Slaw & Curry Mayonnaise’, and ‘Prawn Toban Yaki with Aji Amarillo Garlic Butter’. Ross’ aim with several of the dishes on the menu is to highlight the unsung heroes of the British coastline. He has worked closely with local fisherman to source produce that would normally be shipped to other countries instead of being consumed in the UK; these fish will be championed on the menu at Flesh & Buns Fitzrovia. Mike continued:

“We had to work extra hard to divide the space and create the intimate Izakaya feel. To do this we designed partitions and screens framed with large posts of seasoned Oak which is weathered and cracked adding lots of character we have used different materials to infill the frames, from crackled plaster, slatted screens and dark stained timber panels.

“The large open kitchen is a big feature of the restaurant creating theatre and energy at the heart of the space and the oak dining counter with a live edge is a great place to dine. We wanted to really highlight the kitchen so we designed a creased bulkhead in textured and flat bronze finish which wraps along the periphery of the kitchen. The bar was the other big feature and has a brass slated face and large gantry which houses a big display of Sake bottles adding to the Izakaya feel.

“It was important to control the light from the windows in the daytime and also to add some privacy and intimacy in the evening, to do this we used large lattice screens based on the new Flesh & Buns identity, designed by Kevin Hill at Keso, this gave us both the enclosure and the opportunity to Brand the Building.”

Flesh & Buns’ signature Frozen Yuzu Margaritas remain on the drinks menu at Fitzrovia, with an expansion into the world of Peru’s most celebrated cocktail – the Pisco Sour. There is a selection of Nikkei-inspired Piscos available, including the ‘Matcha Pisco’ and ‘Hakuto Pisco’, which are made table-side on a trolley when diners push the ‘PRESS FOR PISCO’ button embedded into their wooden tables.

Reflecting on the importance of the project, Mike added:

“It’s great to be involved with Ross and Flesh & Buns. They’re well known in London and it’s an exciting concept. It’s good to be involved in the development of the brand.” 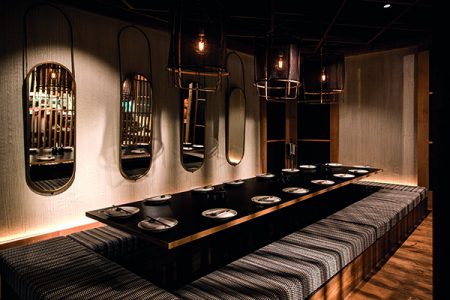 Ross Shonhan’s expertise in Japanese cuisine did not come through an obvious route: born and raised on a family-run cattle farm in Queensland, Australia, he learnt to appreciate where food came from, and it was clear from an early age that food was going to be his passion.

After six years of kitchen experience behind him, Ross moved to London to undertake positions at Asia de Cuba and The Dorchester Hotel. In 2005, he was recruited by the Nobu group, and was appointed Head Chef to open Nobu, Dallas, where he was overseen and trained by the chef and proprietor himself, Nobu Matsuhisa. Ross returned to London in 2007 after being headhunted for the role of head chef at Zuma. Adapting his traditional Japanese cooking methods to a more contemporary style, using unique combinations of ingredients and flavours and presenting dishes in a theatrical way, Ross helped define the cuisine at Zuma, which is regarded as one of London’s finest restaurants.

Ross opened Bone Daddies on Soho’s Peter Street in 2012, with the aim of sparking fresh passion amongst Londoners for Japanese cuisine, in a friendly, unstuffy environment.  August 2013 marked the opening of his second restaurant, Flesh & Buns in Covent Garden. Bone Daddies Bermondsey opened in 2014 ahead of Bone Daddies Kensington High Street, and Shack-Fuyu followed as a pop-up on Old Compton Street, Soho in February 2015 before re-launching as a permanent site in December of the same year. Bone Daddies Old Street launched in June 2016 and Bone Daddies St Christopher’s Place followed it in February 2017. The start of 2018 saw the launch of Bone Daddies Victoria, which is the sixth ramen bar to launch in the group.

Established in 2005 and operating from offices in Billericay, Essex, Monza Contractors Ltd is a leading contractor specialising in projects within the retail and leisure industry. Founded by David Ravenhill and David Spencer, Monza Contractors Ltd is backed by an enthusiastic team of highly experienced site managers and trades people and has built up an excellent reputation for delivering projects within the restaurant sector.

Most recently, Monza Contractors Ltd was appointed as the main contractor on Flesh & Buns, Berners Street, to carry out the entire fit out of the scheme. Getting involved in the early design stages of the project, to ensure costs remained on budget without compromising the overall concept, Monza Contractors Ltd took an empty shell and transformed it into a stunning new restaurant.

“Following our success with the same client on Bone Daddies, Victoria at the tail end of 2017, we were pleased to be awarded this project for their other restaurant brand, Flesh & Buns.

“Flesh & Buns is a higher specification fit out and quite a leap of faith for our client as this is, to date, their largest single investment in a restaurant fit out. This is clearly demonstrated in the fabulous end result.”

“At Monza our all our operatives, including those on the tools and those in management, have a very clear focus on providing our clients with the very best level of service possible. This focus and our ‘can do attitude’ has served us well over the years, forging great relationships with clients which ultimately translates into repeat business, as seen with Flesh & Buns.”

“We wish Flesh & Buns every success with their fantastic restaurant and we look forward to working with them again soon.”