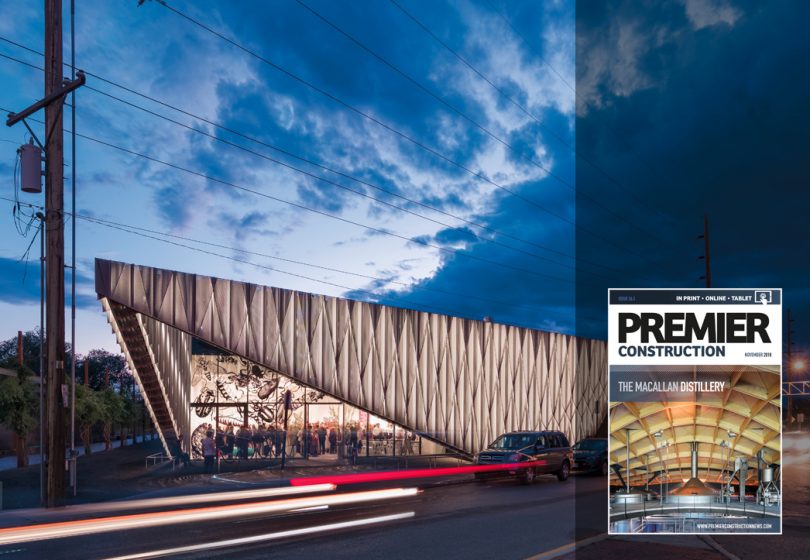 This Month in Premier Construction 26.3

Edrington, the international premium spirits company, has revealed the new distillery and visitor experience for The Macallan. The new distillery and visitor experience is located on the stunning Easter Elchies estate, which has been home to the leading luxury single malt since 1824. From humble beginnings, the brand has risen to become the leading international single malt by value and enjoys leading positions in some of the world’s most significant Scotch whisky markets including the USA, Taiwan and Japan.

It is the first distillery on Speyside to be designed by internationally acclaimed architects, Rogers Stirk Harbour + Partners, who were selected to lead the project after an international competition. Edrington has invested £500 million in the brand of which the £140 million distillery is the centrepiece.

Work on a new glasshouse for propagating trees at Kew Gardens has been ongoing over the last ten months to provide the site with a modern, state-of-the-art glasshouse. Design work on the project began around two years ago with the demolition of the old site and building of the new site starting in January 2018. Kew’s Arboretum is a living library of over 14,000 trees, many of them dating back to the 18th century when Kew’s first director, Sir William Hooker, gave it shape.

The award-winning restaurant Noma worked with BIG – Bjarke Ingels Group to create its new home as a restaurant village just outside of Copenhagen’s city centre. Since opening, Noma has been at the forefront of gastronomy and creativity. The restaurant, recognised four-times as the best in the world by the World’s Best restaurants, last year closed its doors to the 16th century harbour side warehouse that had been its home for fourteen years.

After over three years of planning, Noma’s new home reopened in February this year in a space developed and built in partnership with BIG.

With all this and more, join us as we explore the impressive construction projects that continue to shape our landscape. Go well!