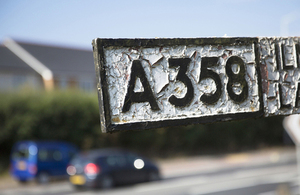 A planned solution to the problems faced by people using the A358 in the South West is expected to be announced in the spring.

Earlier this year members of the public gave Highways England their views on proposals to dual the route, which, with the A303, forms a vital link between London, the South East and the South West.

The Government company has been busy analysing responses and in an update today said that further engineering and economic evaluation was required to help ensure that the route finally proposed is the right one.

It also announced the start of new engagement activities with community representatives early in the new year to help ensure local people are kept informed of progress.

David Stock, Highways England Project Manager for the A358 scheme, said: “We’re very grateful to everyone who participated in our consultation, and we completely understand that people want a solution as soon as possible to the congestion and long delays they currently experience and the harmful impact on the region’s economy.

“The A303/A358 corridor is a vital connection between London, the South East and the South West, and we are committed to improving it, but we have to ensure we have the best solution possible.

“We hope to announce the preferred solution in the spring, we’ll be keeping community groups informed in the meantime, and the public will have another chance to comment on the proposals after we have developed the design of the preferred route.”

Three options were presented during consultation and more than 1,500 groups and individuals responded.

The engagement will start early next year with the first of a series of community forum events with representatives from local authorities, parish councils, local businesses and community groups.

Invitations to the community events will be issued shortly and updates will also be posted on the scheme web page.

The Government is committed to upgrading all remaining single carriageway sections of the A303/A358 corridor, and together with the A358 scheme, Highways England is also delivering the A303 Stonehenge and A303 Sparkford to Ilchester schemes as part of the £15 billion first Road Investment Strategy.

Planning applications for the latter two schemes have been accepted for examination by the Planning Inspectorate.