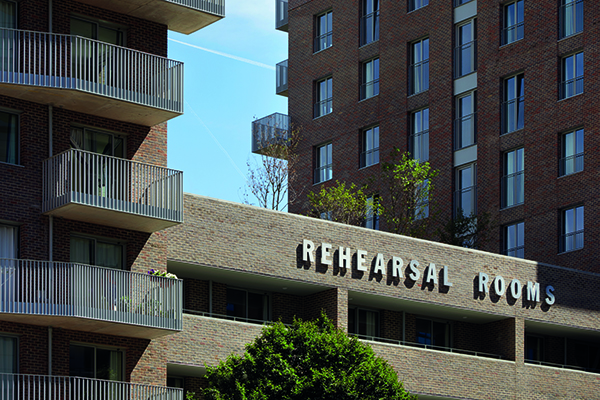 Rehearsal Rooms is one of the first purpose-designed private sector schemes for the Build-to-Rent market in London. As part of an emerging neighbourhood centred around the North Acton underground station and new public square, the project set out to create a community designed around residents’ real needs.

The design was led by London-based Newground Architects. The practice wanted to show that a contemporary, contextual, urban living environment can be achieved with a modest budget through considered design and specification.

In short, the project encompassed two blocks of 17 and 13 storeys, linked by a lower section of four storeys. Together the blocks provide 173 one, two and three-bedroom flats including 18% tenure-blind affordable units evenly distributed and without differentiation.

Since its completion in May 2017, Rehearsal Rooms has received a significant amount of industry recognition. Earlier this year the project was recognised as the 2018 winner of the Duplex Systems Award at the Galvanizers Association Galvanizing Awards. Rehearsal Rooms was also shortlisted at the 2018 Brick Awards and the 2018 British Construction Industry Awards.

Henry Construction was the main contractor for the work.

The configuration of the blocks allows the building to occupy almost the entirety of the site. While the lower of the two blocks is simple rectangular form, the taller reads as three narrow slabs, sliding against one another to take the building around the corner, maximise views towards the city and provide formal rationale for the stepped setbacks at the top of the building.

The relaxed feeling of the building, however, belies the critical thinking that was needed to accommodate the required number of flats on such a small site. More than this, all flats meet, and in most cases, exceed mandatory London space standards with large rooms and plenty of storage. Large sheltered balconies extend the useable private space. The concrete balconies and metal balustrades are integral to the architecture, their geometry and detailing providing articulation, rhythm and interest as well as privacy and views.

The richly coloured brick that dominates the exterior was selected for its hand-made appearance and warm mix of red, purple and orange hues, as well as for its technical properties of resistance to moisture and frost. The lively variety of colours means the brick is surprisingly different under different daylight conditions, which adds visual and tactile interest to the architectural form and massing.

Gardens and terraces are located on all Rehearsal Rooms’ roofs. The roofs are attractively landscaped to encourage use, as well as giving residents access to fresh air, natural light and green space. Provisions such as this have played a key role in creating a sense of community. The ground-level includes commercial space. 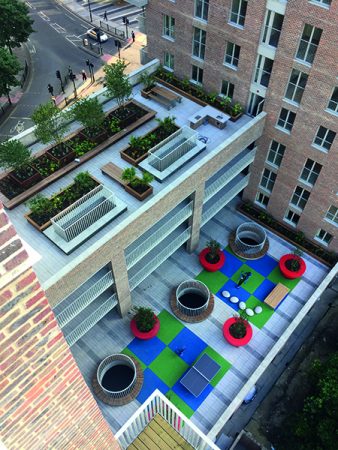 Established in 2013, Newground Architects is a London-based architecture and design practice. Newground has experience working in a number of sectors, including housing, retail, master planning and regeneration. To view more projects from the practice, please visit www.newgroundarchitects.com.