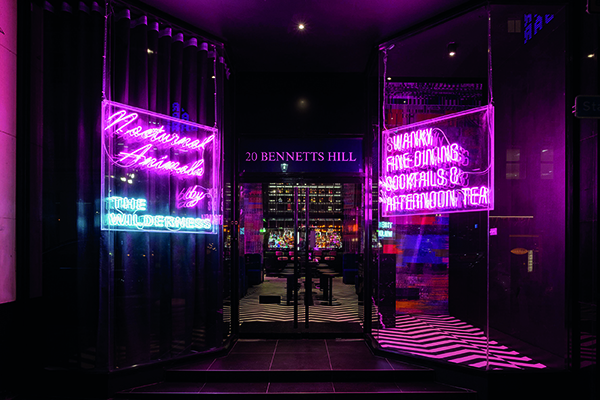 Nocturnal Animals, a brand new concept by The Wilderness, has opened its doors in Birmingham City Centre.

Located at 20 Bennetts Hill, this is the second venue conceived by Alex Claridge who wanted to create a fun and inventive experience for guests. The site, inspired by 80s pop culture, provides a culinary journey with ingenious drinks, bold flavours and afternoon tea unlike ever seen before.

Design specialists Faber Design were tasked with creating the interior of Nocturnal Animals with the design concept taking its direction from the food. Faber worked alongside side Construction and Interior Design company 2G Design & Build, who offered build services on the project.

Claridge conceived the menu whilst listening to the ‘All Out 80s’ Spotify playlist and instructed the team at Faber to do the same while formulating ideas for the interior. The result is a riot of slick monochrome, vividly colourful graphic prints, postmodernist furniture silhouettes, David Lynch-esque passageways and kitsch neon signage.

Speaking to Premier Hospitality magazine about the project, Aisling Ryan, Mid-Weight Designer at Faber said: “The main bar area as you enter the venue is designed to accentuate the double-height space with a fully illuminated cocktail bar that towers over the ground floor level – and a gantry which provides access to a ‘top shelf’ collection of exclusive spirits. A series of voile hangings amongst the bar seating area depict ‘glitchy’ white-noise type imagery, nodding to the pop culture, 80s music-video vibe present throughout.”

Downstairs is home to a 42-cover fine-dining restaurant, where the food draws heavily on the kitchen’s Konro charcoal grills, as well as eclectic influences from both modern Japanese and Chinese cooking. The restaurant also offers an ambitious and accessible taster menu for both lunch and dinner – as well as an à la carte bar menu across all floors.

Aisling added: “Leading from the cocktail bar on ground level to a 42-cover fine-dining restaurant in the basement, is an almost surreal, stark-white corridor, made even more dreamlike by the use of white recessed LED lighting in the walls, which cleverly plays with the perspective. The starkness is immediately contrasted by the kaleidoscopic geometric flooring as you enter the restaurant level, tempered by more monochrome in the form of black walls, black voile curtains, white metallic chairs, white marble tables and simple globe lighting.”

Upstairs, the décor is bold and adventurous, offering ample room for up to 60 people.

“Nothing about this venue is ordinary – and the bathrooms are no exception,” said Aisling. “The multi-coloured block tiling and almost mathematical clean lines of the bar toilets make you feel like you’ve stepped inside a Rubik’s cube. In the restaurant toilets, the bespoke Timorous Beasties wallpaper is, on first impression, a surprisingly demure French toilet print. However, a closer look will reveal anything but; instead depicting what you might describe as ‘lively’ scenes of the streets of Edinburgh.”

A theatrical and thoroughly modern Afternoon tea overseen by MasterChef: The Professional’s finalist Brett Connor is served with a selection of sweet and savoury dishes in a tasting menu format, with additional options of champagne and cocktails.

Alex Claridge, Chef Patron said: “Nocturnal Animals takes food and drink very seriously but that’s about it. This is fun dining above all else. We are bringing something very different and very new to the heart of the city.”

Aisling added: “The idea was to shatter people’s traditional perceptions of what fine dining should look and feel like, which also required us to challenge our usual approach to restaurant design. The result has been a pivotal project for Faber, demonstrating the team’s ability to bring the very varied visions of our clients into being.”

Nocturnal Animals is open Tuesday to Sunday from 12pm until 11pm. 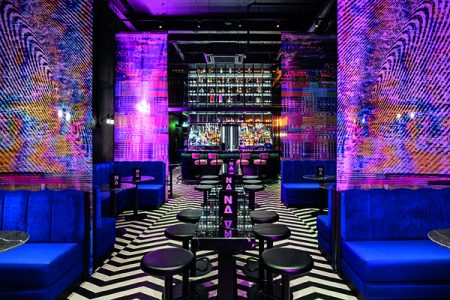 HNS Signs are an award winning Birmingham based Signage Company. With four generations of experience, they know how to get your company message across. Their skilled printers and sign makers use proven methods and the best materials to ensure that your sign does exactly what you need it to in a cost effective yet consistently impressive way.

In operation for eight years the company has a varied portfolio, including work on Arcadian projects and a Ted Baker roll out, which won them international awards. Other projects have included custom designed and printed wallpapers for Yell Belfast, Yell Birmingham and Yell Scarborough and on these projects, HNS were able to show off their creative flare and illustration skills. The company also does work with breweries and are currently working with Sadler’s Ales on their tap bar roll out.

HNS Signs were recently involved with the Nocturnal Animals site in Birmingham where they were asked to manufacture and install the signs designed by Faber design.

Commenting on the work at Nocturnal Animals, Michelle Henry from HNS Signs said: “We are already big fans of the Wilderness so we were incredibly excited to be asked to work on this project, especially as these guys are just as quirky as us!”