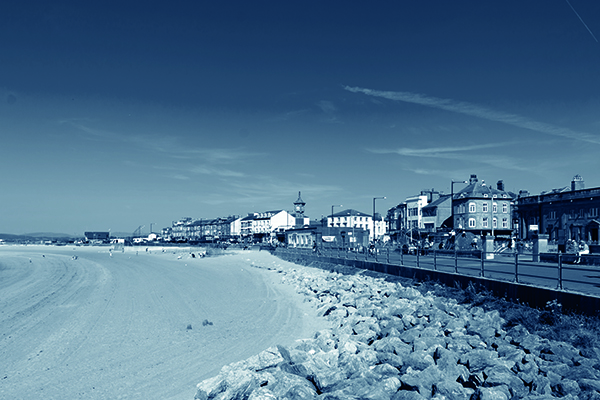 Funded by a £10.8million central government grant-in-aid-funding, the wave reflection wall defence will reduce flood risk to 11,400 homes and has a design life of 100 years, taking into consideration climate change and sea level rise.

Led by Lancaster City Council, in partnership with the Environment Agency, the wall consists of 4km of reinforced concrete defences that will provide protection against a major flood event. In addition to protecting 11,400 residents, the wave replacement wall will also:

Phase 1 of the work from Lord Street to Happy Mount Park was completed in summer 2017 and was a resounding success in both public perception and performing the primary function of preventing high tides from breaching the defences.

Phase 2 of the project took place between the Midland Hotel and the Battery with phase 3 taking place along Sandylands Promenade between the Battery and Oakley Road. Worked started on phase 3 in May 2017 and also comprised of the refurbishment of an existing wall.

Atkins were tasked with designing the replacement reflection wall which features motifs reflecting local personalities, stories and references to flora and fauna. Sympathetically designed to fit in with the local environment, the wall includes a nod to late local legend Eric Morecambe – with the shape of his glasses engraved in an end section. It has been designed to be robust as well as being beautiful in design – it has a sloped back on the seaward side to give the impression of a wider promenade space. New surfacing, lighting and furniture have also enhanced the promenade for residents, visitors and all users of this high profile seafront commission.

The wall also includes three viewing areas, accessed by a ramp at each side and a central set of steps that fan out in a semi-circle. A matching set of ramps and steps mirrors this on the promenade side of the wall, creating an up and over access at three points along the three mile stretch.

Floods Minister Thérèsa Coffey said: “Morecambe’s new wave reflection wall, which has been entirely funded by the government, is absolutely fabulous and I want to thank the council and other partners in their support in achieving this.

“I also want to thank local MP David Morris who worked tirelessly to make the case for nearly £11million of investment into this flood defence, better protecting more than 13,000 homes and businesses as well as the local tourism industry from the risk of flooding.”

Environment Agency Area Director for Cumbria and Lancashire, Keith Ashcroft said: “In the face of challenges like a changing climate, rising sea levels and more severe weather, the Environment Agency is working hard to protect people, homes and business from flooding.

“The Morecambe wave reflection wall is a great example of partnership: by working together the Environment Agency, Lancaster City Council and engineers VBAJV Ltd have created an exceptional value-for-money sea defence.”

Lancaster City Councillor Janice Hanson, Cabinet member with responsibility for regeneration and planning said: “The repair and replacement of the wave reflection wall has been a vitally important project and will protect thousands of homes from risk of coastal flooding. The design is second to none and as well as the protection it provides the wall has really helped to enhance the promenade and reflect the beauty of its setting in Morecambe Bay.

“We have received many positive comments from both residents and businesses, which is a testament to the hard work and dedication involved.”

Richard Walsh, Project Manager at VBA, a joint venture comprising VolkerStevin, Boskalis Westminster and SNC-Lavalin’s Atkins business said: “As the main contractor, VBA is extremely proud to be involved in a scheme that brings a wide range of benefit to the local community, not only protecting homes and businesses from flooding, but providing a lasting legacy to residents and visitors for many years to come.”

Valbruna UK process this material for the civils and construction industry throughout the UK and Ireland. The company has been in operation since 1986, while Acciaierie Valbruna S.P.a has been producing stainless steel for well over 90 years. In 2002, Valbruna UK became the first mill producer to cut and bend stainless steel reinforcing bars in the UK.

“As one of the most prestigious projects in the UK to utilise stainless steel in such quantities it was a pleasure to be involved in from the beginning in order to showcase the capabilities of Valbruna cutting and bending reinforcement service and benefits stainless steel can bring to civils and construction projects.”

“We pride ourselves in close customer support and service ensuring customer requirements are met quickly and accurately and on time.”