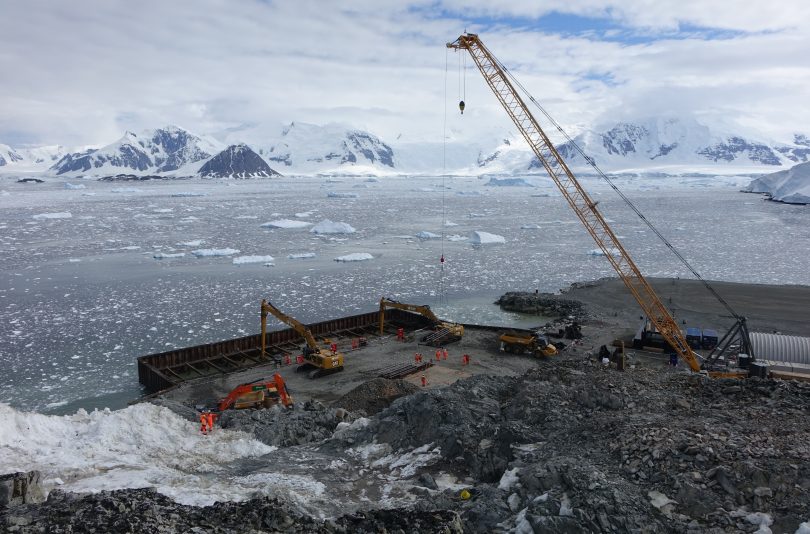 Construction of a new 74-metre long wharf gets underway at the Rothera Research Station in the Antarctic.

The commissioning of the RRS Sir David Attenborough is part of a major government polar infrastructure investment programme designed to keep Britain at the forefront of world-leading research in Antarctica and the Arctic. This £200m commitment represents the UK government’s largest investment in polar science since the 1980s. It includes a raft of modernisation across the BAS estate. Supporting BAS is a Technical Advisor team led by Ramboll, which includes Turner & Townsend and NORR Architects, working alongside BAS’s construction partners BAM.

Meticulous preparations for the wharf construction have been underway for two years, culminating in the arrival of the cargo ship DS Wisconsin in Rothera in late December 2018. Loaded with 4,500 tonnes of steel and equipment, the ship took a full 11 days and nights of round the clock work to unload, marking the beginning of this major construction operation in the Antarctic. Deconstruction of the old wharf is now underway. Two 35 tonne excavators, operated by BAM, broke through the surface of the old ‘Biscoe’ wharf in mid-January and two 90 tonne long reach machines are in place for the deep excavation and dismantling works.
BAS engineer and project manager David Seaton said: “Construction work in Antarctica is like nothing else, and it has taken a vast amount of planning, practising and preparation to get us this far. The next few weeks will be critical to the success of the project and we hope to make good progress whilst we have long hours of daylight and relatively favourable weather conditions, knowing that in a few months when winter approaches, things are likely to get a lot more difficult.”

BAM project manager Martha McGowan said: “We are really pleased to have begun this exciting and important work on the wharf that will berth the world’s most famous research ship – the RRS Sir David Attenborough.

“Because of the practical restrictions of working in one of the most remote construction sites in the world, the construction team practised full-scale assembly of the 30 tonne steel rigs, that will form the skeleton of the new wharf, prior to leaving for Rothera. In doing this, we were able to identify unexpected challenges or additional pieces of equipment needed whilst still in the UK, rather than once everything had been shipped 11,000km to Rothera.”

Jenny Symons, Ramboll senior engineer returned from Rothera this week, having spent 10 weeks supporting BAS and BAM during the construction so far said “I have really loved being in Rothera, it’s a remarkable place. The team spirit is great, and it’s been a pleasure to be part of that and supporting BAS in the construction of the wharf.”

Construction of the new wharf is to take place over two Antarctic seasons and is due for completion in April 2020.