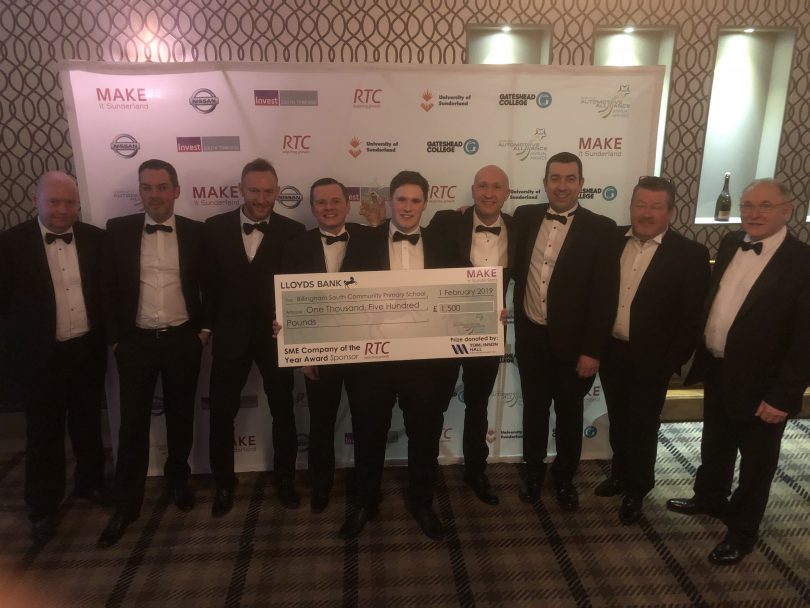 The region’s leading pump distributor and manufacturer, Tomlinson Hall, was crowned as winners at a prestigious award ceremony held to recognise outstanding business performance by companies operating in the automotive sector in the North East.

Based in Billingham, the company – which has just headed into its 100-year anniversary – was announced as SME Business of the Year at this year’s North East Automotive Alliance Awards.

Held at the Roker Hotel in Sunderland, the event brought together a host of esteemed companies keen to celebrate business excellence throughout the North East.

Speaking about the award, Colin Simpson, Business Development Director at Tomlinson Hall said: “It is a huge honour to receive this award and be named as SME Business of the Year. The award is a testament – particularly as the business heads into its centenary year – to the team’s continued commitment in driving the business forward and flying the flag for companies in the North East.

“We faced very tough competition to receive this accolade. We believe as we are in the unique position of being both a pump distributor and one of the UK’s sole remaining manufacturers this really made us stand out.

“As we are seeing an increased demand for quality British engineered products, we plan for the manufacturing side of the business to grow even further over the next year, which will be a further celebration to add to the company’s impressive heritage.”

Recently reporting its most successful year to date, the company has increased sales by almost half a million in the last 12 months, as well as forged a new partnership with a global brand leader ITT Gould Pumps. Driven by an uplift in export activity, the pump business has catapulted itself as the brand to be challenged in its sector.

Established in 1919, Tomlinson Hall is a long-standing distributor of major industrial pump brands. The company also manufactures its Liquivac pump from its facilities in Billingham comprising two workshops on a 1.5-acre site. Providing a full end to end service from pump selection, supply and site visits right through to servicing and re-pairs, the company has worked with leading businesses across Europe, the Middle East, North America, South America and Asia.