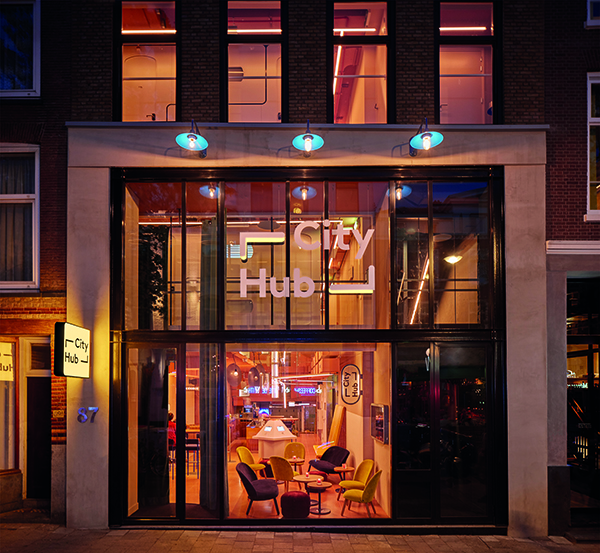 Witte de Withstraat, one of Rotterdam’s liveliest streets, has a new resident. Completed in the spring of 2018, Cityhub Rotterdam is a completely new type of hotel that embellishes the digital lifestyle. CityHub joined with the design team at Studio Modijefsky and have modified three existing buildings to create the second of their new interactive hotels for the digital native.

Typical rooms are replaced with futuristic sleeping units or hub, and the futuristic concept adds even more excitement to travels as the Cityhub has a fresh futuristic feel that sets it aside from every other hotel in the area. The interactive nature of the hotel allows guests to arrive at any time, check themselves in and enjoy the space whenever and however they desire. This brings in a fresh bout of independence that a younger generation of travellers will love. Esther Stam, founder and creative director of Studio Modijefsky was working together with her team of architects on the design of the hotel. She told us a told us a little bit about the concept of staying in the Cityhub:

“This hotel works in a different way than most, there’s no reception. You check yourself in and get a wristband that scans you into your room, the lockers, and the bar. It was an interesting project to work on.”

It is the Hub’s location and concept that has provided the inspiration for the building’s new interior design. Through preserving traces of the old walls and finishes and combining them with a new palette, the three adjacent buildings have been cleverly merged to allow each to retain their individuality. The interior of the building is heavily layered, using not only various layers of materials, but also custom-made elements. The best example of this approach can be found in bathrooms, where bespoke sinks and wall cabinets partly cover the existing windows. Without blocking the view, a new layer is created over the old structure of the building. Bathroom finishes colours vary from blue to pink and go against gender stereotypes. Esther said:

“What was important to us in the design was that the buildings clearly look like three individual ones from the outside, and as well as merging the inside into one full hotel. We wanted people to feel that they were in three different zones. Each building got its own colour. Pink, blue and yellow, and because the top of the building lets more sunlight in than the downstairs we used different colour tones on the walls and carpets to contrast that, so each floor has a lighter hue to create a distinctive, lightening colour palette the further down you go. Since it is such a big building the colours also help guests orient and find different parts of it.”

Signing, inspired by the different materials used in the original buildings, references the nearby surroundings and invites passers-by to step inside. As visitors walk into the hotel lobby, a large white object draws their attention. Forming the digital check-in point, this element turns into a chandelier on the ceiling, splitting into several different light lines that guide guests throughout the entire building. Esther commented on the significance of this feature, as it is a centre point of the hotel:

“Light lines that track through the hotel guide guests through the staircases, corridors and also the hangout space; they work into a linear chandelier and they go throughout the building.”

When brought together, these design elements let the building guide guests through the hotel, giving the unique Cityhub the role of friendly and futuristic host. 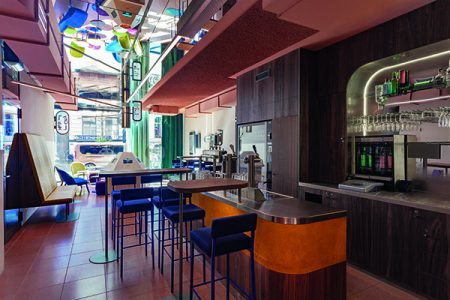