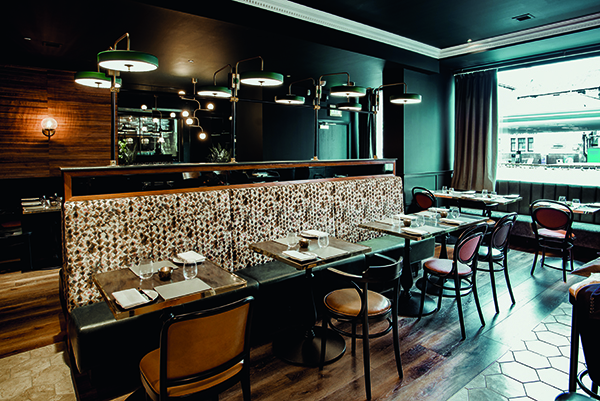 Chef Tom Kitchin has opened Southside Scran, the fourth restaurant in his Edinburgh-based restaurant group. Bridging the gap between his Michelin-starred flagship and his popular gastropub, Southside Scran serves a seasonal menu of rotisserie-focused dishes alongside a daily seafood selection.

Located in the heart of Bruntsfield, Edinburgh, Southside Scran opened in November 2018 and is the fourth restaurant in The Kitchin Group alongside the Michelin-starred Kitchin in Leith, Castle Terrace in Edinburgh City Centre and the Scran and Scallie in Stockbridge, which holds a Bib Gourmand.

At Southside Scran, guests enter via an elegant bar, leading through to the dining room with rustic timber flooring and classic marble tiles in a nod to traditional French bistros. The restaurant concept features twists on classic bistro style seating using a variation of different textures, materials and fabrics, complimented by bespoke lighting features throughout. During the day the restaurant is flooded by natural light streaming through large street windows on Bruntsfield Place before it transitions during the evening into an intimate and cosy space hosting ambient lighting and a roaring fireplace in the bar area.

The dining room at Southside Scran features an open Maestro Rotisserie grill showcasing local produce, with the Southside menu a real tribute to the best of Scotland’s larder displaying a love and passion for French cuisine. The Kitchin Group’s Head Sommelier, Joel Bastian, has curated the wine menu and a seasonal cocktail menu is also available.

The space and interiors were designed by Tom’s wife Michaela Kitchin and Stephen Paterson of Burn’s Design.

Premier Hospitality magazine spoke to Stephen about the project.

How did you get involved with this project?
“We became involved following our long term relationship with the Kitchin Group, having been involved with the interior design of the sister restaurants The Kitchin, Castle Terrace and The Scran & Scallie.”

What did the project involve for you?
“The project consisted turning a former shoe shop into a bar restaurant over the ground and basement floors. The previous shop was made up of small shops linked together, however to create a space that worked operationally and supported the Kitchin Groups client focused requirements, a lot of structural alterations and layout design work was undertaken prior to getting to the visual design elements.”

Were you given a brief for the design of the space?
“The brief was to create a stylish bistro with hints to classic French bistro’s and brasseries that would form part of the neighbourhood and not feel overly formal. Working closely with Michaela, a palette of deep classic greens, soft faded terracotta’s, marble, warm timbers and antique mirrors were chosen.”

What were the timescales of the project?
“The project was first discussed towards the end of 2017 with preliminary space planning. We started on site in late spring 2018 and the project completed in November 2018.”

Have you heard any feedback since the site opened? How has it been received?
“There has been a lot of positive feedback on the space feeling intimate, while relaxed and cosy with a modern edge on the classic bistro.”

In their own words…

GID was principal contractor on the Southside Scran project! A huge step in magnitude size wise but definitely within our capabilities and ultimately in the right direction! It meant a whole lot of sleepless nights for Co-Founders Bryan and Kyle! Satisfying doesn’t even cover the fact GID delivered on this massive undertaking.

Although we take on all building works both private and commercial, we seem to excel in jobs like the one we have just carried out at the Southside Scran. Tight timescales and organisational nightmares seem to be our forte. As GID Contracts Scotland Ltd we have been in operation for 28 months.

The Kitchin Group has been on our client list for almost 2 years, but our working relationship with them goes back around 11 or 12 years from the company Kyle and Bryan worked for before they decided to set up GID.

GID have had many wonderful clients including restaurateurs in Glasgow (Italian Kitchen, Viva, The Taphouse) as well as others in Edinburgh (The Little Chartroom, Bross Bagels) – with still some new and exciting food focused projects in the pipeline.

We pride ourselves in meeting the timescale for the client and details. GID stands for Gets It Done! We try to make sure that happens on time, on every job we undertake, whomever the client!