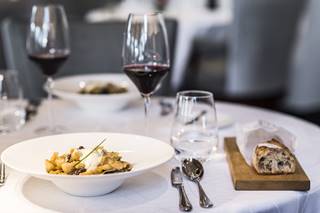 Sébastien Cassagnol is the new Executive Chef of the Royal Savoy Hotel & Spa Lausanne (http://www.royalsavoy.ch/), bringing his rich international experience to perpetuate the tradition of excellence, refinement and terroir of the Royal Savoy. At the head of a team of 45 chefs, cooks, culinary assistants, kitchen staff, he wants to combine the quality of dishes, the authenticity of products and the innovation of flavours and menus.

Determined since his early childhood to embrace a culinary vocation, Sébastien Cassagnol followed a French training in the hotel business. A cook with a Secretary of State, he then broadened his horizons by holding several positions abroad, in England, Australia and New Zealand. Upon his return to France, he perfected his skills as Deputy Executive Chef under the direction of the famous chef Jean-Georges Vongerichten in his Parisian restaurant, “Market”. Sébastien Cassagnol continued his career as Executive Chef in Bora Bora, the Middle East and recently at Mamounia, the world-famous establishment in Marrakech.

The combination of his solid skills, his taste for good products, his international experience and his ability to lead large teams make Sébastien Cassagnol the ideal Executive Chef to translate the global and local ambition of the cuisine of the Royal Savoy Hotel & Spa Lausanne. Its association with Signature Chef Marc Haeberlin will enable Brasserie du Royal to pursue its mission of promoting regional products, in a spirit of creativity that has already earned the establishment its reputation.

“Cooking is an art and a craft, which can only be successfully accomplished by the application of c lear thinking, persistence, knowledge, experience and a great deal of intuition” affirms Sébastien Cassagnol.

General Manager, Alain Kropf adds “We are very fortunate to have such a well-travelled and internationally experienced Executive Chef as part of our team. Sébastien Cassagnol has already proven himself to be an excellent leader and we are excited to see how he will inspire new creativity into our restaurants and bars over the coming months.”