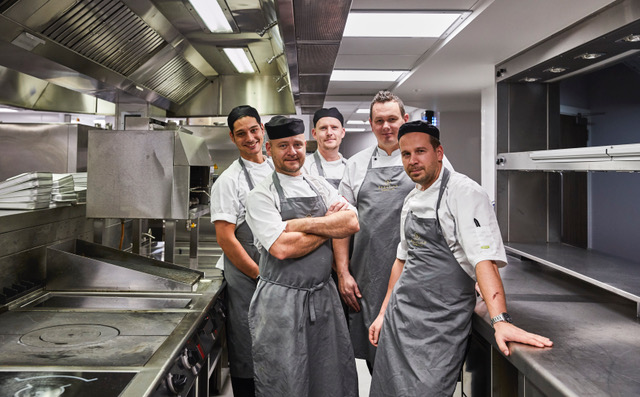 The Steelite International UK Rising Star Chef Competition sees chefs from around the UK, between the ages of 18-25, and currently working in a 4* and 5* hotel or hotel restaurant, compete against one another in a series of cook-offs.

Having reached the final, Griffin had to create and plate-up a main dish for an esteemed judging panel, using only ingredients that were  revealed on the day. Up against some of the UK’s finest young chefs, Griffin’s flair and creativity shone through and he beat-off the stiff competition.

Having started out in building and construction, a chance temporary job as Kitchen Porter at the Crowne Plaza – Manchester Airport saw him taken under the wing of renowned northern chef, Andrew Green, now Executive Head Chef at Mamucium. Under Andrew’s guidance he discovered his passion for gastronomy.

Within a year of working at the Crowne Plaza – Manchester Airport, Griffin had progressed to the role of Commis Chef and made the move to the Lowry Hotel with Andrew Green. Here he was named Demi Chef de Partie, and nominated for the Manchester Hoteliers Association’s (MHA) Young Chef of the Year where he came runner up.

Andrew Green, Executive Head Chef of Mamucium said: “We are immensely proud of Isaac and the hard work he has put into this competition. To see him beat off a stellar line-up of young chefs,  from some of the top restaurants in the UK and receive the excellent feedback he did has been incredible to see. This win is testament to the absolute dedication he has for his job and the passion he holds for the dishes he produces. He’s a core member of the team here at Mamucium and is helping to put us firmly on Manchester’s culinary map”.

Mamucium is a dedicated restaurant and bar serving a menu of modern British classics with a northern twist. Provenance runs through Mamucium’s menu, as dishes are prepared using the finest local ingredients and merchants.