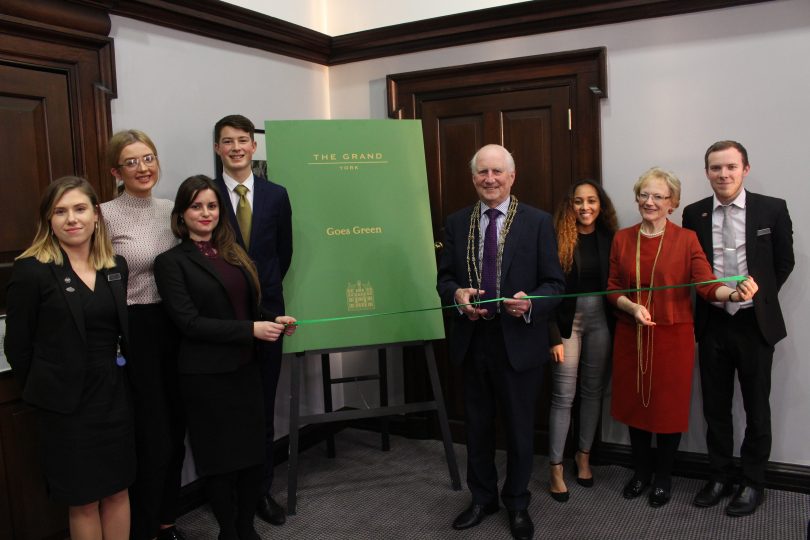 The Grand, York, has committed to a new scheme, The Grand, York, Goes Green, led by the Junior Board and have pledged to eliminate all single use plastic by December 2019 as their first key project, launched by Lord Mayor Keith Orrell on 21 February 2019.

Formed in August 2018, the Junior Board is an initiative made up of six enthusiastic junior members of the hotel’s team, with a representative from most departments. Meeting on a monthly basis, the board set their own agendas and projects, based on issues they believe the hotel must tackle as part of its ongoing improvement and development plans.

Taking inspiration and gaining knowledge from the wider industry, the board meet with influential businesspeople from York and beyond, such as Steve Brown, managing director of Make it York, Bridget Davies, managing director of Minster FM, and Stuart Bailey, chief executive officer of Splendid Hospitality Group, to further their ideas and plans.

During just six months of working together on this project, the board has already successfully implemented several initiatives to support their green ambitions including starting an internal communications channel where members can share monthly tips, eradicating plastic straws from the business, installing a filter system to reduce glass bottle use, introducing separate bins for plastic, signing up to the Sustainable Restaurant Association on behalf of both of the on-site restaurants, and working with suppliers to remove plastic packaging from the goods they receive.

Commenting on the board’s purpose, Olivia Odudu, marketing executive and head of the Junior Board said; “This initiative is very important to the team at The Grand, York. We’re sure other people are doing great things for the environment, but we’d love to do our bit too and hopefully this will influence others to take the next step. For us, it’s important for not just The Grand but for York’s hospitality sector in general, we need to strive for greener policies, for our guests and future generations too!”

Philip Bolson, general manager of The Grand, York, noted; “The Junior Board is a great initiative for The Grand, York and our ethos is to ‘learn, impact and enjoy’. It’s important for me to be able to help young professionals strive for success and help further their development for the future, which is why the Junior Board was originally created. It’s great to have a set of young and talented individuals as part of the board and I look forward to seeing the development of the team.”

The elimination of plastic is only the first stage for the board, however. Next, they have their sights on reducing paper and food waste by an impressive 50%, no mean feat for a hotel with over 200 bedrooms and 180 members of staff, but it will be a huge achievement for the Junior Board as they continue to make an impact on York’s premier hotel.