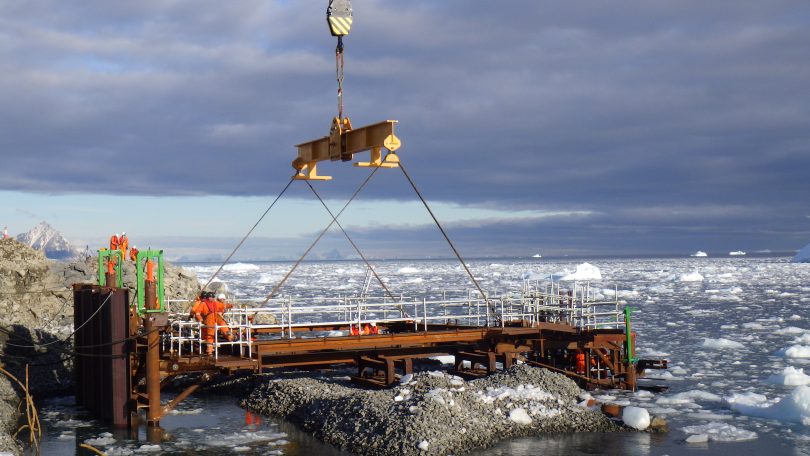 A major milestone has been reached on the British Antarctic Survey (BAS) new Antarctic Wharf project at Rothera Research Station. Following two months of deconstructing the old wharf, the first frame of the new 74-metre long wharf has been lowered into place.

Over the weekend, divers completed the final part of the wharf deconstruction along the sea bed, making way for the first 55-tonne frame to be installed on Tuesday. Lowered carefully into position onto temporary guides from a 300-tonne crane, the operation took 12 hours. In relatively warm and sunny conditions, the team worked throughout the evening fine tuning the setting out of the frame to within 40mm tolerance. This precision engineering was critical to ensuring the alignment for the new wharf, which will provide safe berthing and efficient operations for the new RRS Sir David Attenborough.

In total 20 frames will make up the wharf’s skeleton, with seven due for installation during this construction phase that is being delivered by BAS’s construction partner BAM and technical advisor Ramboll.

BAM Ian Wenkenbach Project Engineer said: “Two years of planning came to bear fruit yesterday, with the successful installation of the critical first frame. The full-scale trial assembly and lift undertaken back in September in the UK ensured that the operation here in Antarctica went according to plan.

“To install the frames, which form the skeleton of the new structure, we are using a hydraulic jacking system, a concept developed in-house to allow accurate levelling of the frames after installation, as well as specially designed lifting frames, support structures and access platforms”.

“There is a great sense of achievement here in Rothera at this crucial milestone as the deconstruction of the existing wharf makes way for construction of the new wharf. Overseeing yesterday’s successful operation was a very proud moment for all of the BAM, BAS and Ramboll team” comments Alan Roper, Ramboll Site Supervisor.

Importance of the new Antarctic Wharf

The commissioning of the RRS Sir David Attenborough is part of a major government polar infrastructure investment programme designed to keep Britain at the forefront of world-leading research in Antarctica and the Arctic. This £200m commitment represents the UK government’s largest investment in polar science since the 1980s. It includes a raft of modernisation across the BAS estate. Supporting BAS is a Technical Advisor team led by Ramboll, which includes Turner & Townsend and NORR Architects, working alongside BAS’s Construction Partner BAM.