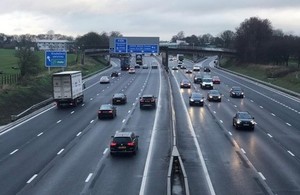 Highways England has completed a £265 million project to add extra lanes and new technology to a 19-mile stretch of the motorway between Crewe and Knutsford – the most significant change since the M6 first opened in the county in 1963.

A fourth lane has been introduced in each direction and a total of 258 electronic signs, 104 traffic sensors and 70 CCTV cameras will help tackle congestion and improve journey times for around 120,000 drivers every day.

The upgrade is the first of four smart motorway schemes to be finished that will increase the M6’s capacity by a third on 60 miles of the motorway between Coventry and Wigan.

Jim O’Sullivan, Chief Executive of Highways England, said: “We have delivered the biggest upgrade to the M6 since the motorway opened in Cheshire almost 60 years ago, and it will mean quicker and more reliable journeys for everyone from businesses making long-distance deliveries to commuters getting to and from work.

“Tens of thousands of drivers travel on the M6 between Crewe and Knutsford each day making it one of the busiest stretches of motorway in the country, so the extra lanes and new technology will help make the M6 fit for the future.

The new overhead electronic signs will provide drivers with live information “about their journeys, including changes in the speed limit, lane closures and incidents on the route.

Traffic sensors at the side of the motorway will also be used to automatically set variable speed limits to keep traffic moving, preventing tailbacks and stop-start conditions caused by sudden braking.

And new CCTV cameras will provide extensive coverage of the motorway to help Highways England’s traffic officers and the emergency services respond quickly to incidents, with frequent emergency areas giving drivers a safe place to stop if they break down.

Transport Secretary Chris Grayling said:”We are investing record amounts to improve journeys for people right across the country – including £13 billion on transport in the North.

“This upgrade will mean motorists in the North West will get to work, the shops, or to visit friends and family more easily, quickly and safely.

“It also builds on other improvements in the region where drivers are already seeing the benefits of investment in the M60, M62 and the A556.”

Drivers have already been benefitting from better journeys after the first two sections of the M6 upgrade were completed earlier this year, and the whole scheme has been finished over a week ahead of schedule.

Statistics from the first week of operation of the stretch between Middlewich and Knutsford (junctions 18 to 19) show that traffic was flowing at around 70mph for 22 hours each day, with the new variable speed limits also helping to keep the motorway congestion-free during peak times.

Tatton MP Esther McVey visited Highways England’s North West regional control centre in Newton-le-Willows earlier this month to find out more about how the new technology will help to keep the motorway moving safely. She said: “I visited the control centre to see for myself how the smart motorway will benefit and support Tatton residents and drivers. The centre acts as an ‘all seeing eye’ which monitors the roads, takes calls from the public, and links up the emergency services and Highways England traffic officers.

“I was reassured that, even with the hard shoulder now being used as an extra lane, accidents and breakdowns can be attended to faster as a result of the smart motorway intelligence.”

Other improvements that have been carried out as part of the scheme include resurfacing the entire route with a low-noise road surface, installing a new concrete safety barrier to reduce the risk of vehicles crossing onto the opposite carriageway in collisions, and fitting 700 metres of noise barrier to reduce noise levels for people living close to the motorway.

Highways England is reminding drivers getting used to the new four-lane motorway to keep left unless overtaking and to take note of the new electronic signs to make sure they are getting the full benefits of the smart motorway upgrade.