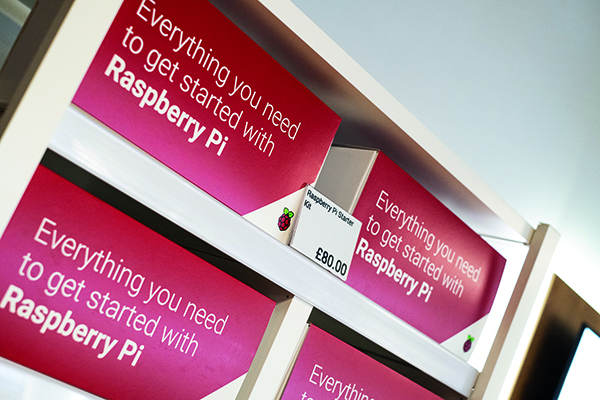 Located in the Grand Arcade, Cambridge, Raspberry Pi, the company behind credit card sized computers, has opened its first store.

The store, which was previously occupied by Crew Clothing, is 1,175sq ft. and offers an interactive environment and one-to-one advisory space, as well as product sales with an educational slant for customers.

Speaking to Premier Retail magazine about the project, Raspberry Pi Founder Eben Upton said: “We have always been interested in getting closer to our customers to understand their needs and what we can do to better meet them. Our traditional online channel puts two or three intermediaries into the process, so the opportunity to interact directly with end users is very valuable, above and beyond the profits we might hope to generate from the store.”

It’s  a very simple, clean look store with wooden floors and white/grey painted walls. In the centre of the store is a table and benches with six Raspberry Pi units of various sorts available for people to play with. Down each wall are pods showcasing common use cases and further back in the store is a sofa and coffee table, where people can browse various publications. There are also shelves containing both Raspberry Pi products and publications and selected third party products.

“Opening a store is an idea that we’ve kicked around for several years within the technical team,” said Eben. “Gordon Hollingworth, our Director of Software Engineering, was a strong advocate of doing something in this area. Last year we were able to hire an experienced store manager, Oli Wilkin, to actually get the project over the finish line.”

Before the bricks and mortar store launched, the majority of Raspberry Pi units and accessories were sold online through the official store and stockists such as Premier Farnell and RS Components. By opening a store, Eben hopes to attract new customers, as well as developing the current Raspberry Pi community.

He said: “We hope to provide a venue where people can come to buy a broad range of electronic products at a reasonable price and to learn more about our product and mission.

“If we’re going to grow a business, it’s essential that we understand our customers better and reach new demographics, so I’d say that this is one of the most important things we’re doing this year.”

Founded in 2012, the Raspberry Pi Foundation is a UK-based charity that works to put the power of computing and digital making into the hands of people all over the world. They do this so that more people are able to harness the power of computing and digital technologies for work, to solve problems that matter to them, and to express them creatively.

Eben added: “People seem very pleased with the store. For some of our existing customers it has become a pilgrimage destination; we had one customer drive a Nissan Leaf electric car down from Manchester to see us, which must have involved some serious recharging logistics! Pleasingly, we’ve had a lot of walk-in custom from new users, which gives us some confidence we’re going to reach and interact with a new audience.” 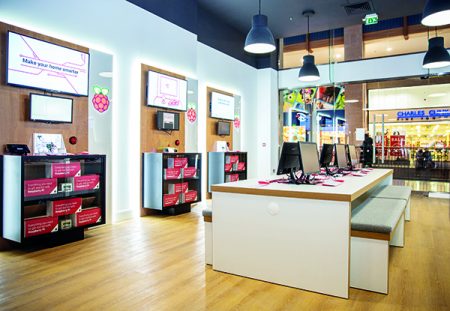